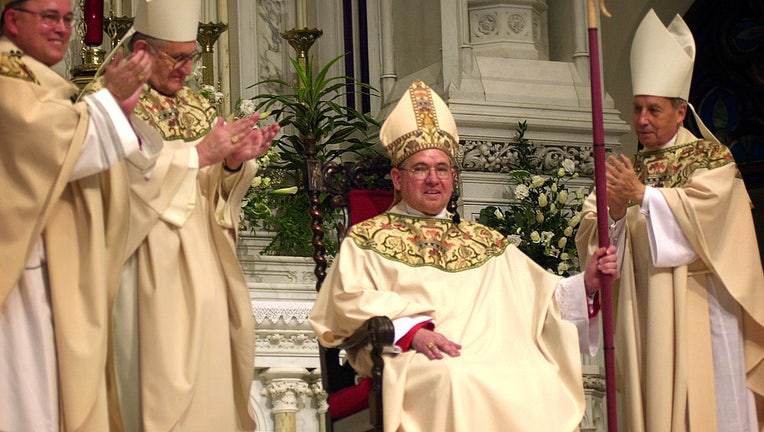 Bishop Jose Gomez rest in his seat of honor (Bishops Chair) for the first time after being presented with his ring, Miter and Pastoral Staff by Archbishop of Denver Charles Chaput, left, at Basilica of the Immaculate Conception. Some 900 people atten

BALTIMORE - Archbishop José Gómez of Los Angeles, an immigrant from Mexico, pledged to push for a more welcoming immigration system after winning election Tuesday as the first Hispanic to head the U.S. Conference of Catholic Bishops.

“I’m humbled by your support,” said Gómez, whose predominantly Hispanic archdiocese of 4 million Catholics is the largest in the U.S. “I think it is a blessing for the Latino community.”

Archbishop José Gómez of Los Angeles, an immigrant from Mexico, overwhelmingly won election Tuesday as the first Hispanic to head the U.S. Conference of Catholic Bishops.

The issue of immigration is personal to Gómez, who has relatives and friends on both sides of the U.S.-Mexico border. He described the situation at the border as a “tragedy” and said he witnessed the “suffering of the people there” during visits to south Texas cities last year.

“It’s an essential cause,” he said of overhauling immigration policy. “Our encouragement to elected officials is to find a good, solid immigration reform that allows people to move legally.”

Gómez, 67, has been vice president of the bishops’ conference for the past three years. He is considered a practical-minded conservative in terms of church doctrine but has made clear his disappointment over key immigration-control policies adopted by the Trump administration.

He said he was praying for a favorable outcome from the U.S. Supreme Court after it heard arguments Tuesday on whether the administration could end a program that allows some immigrants to work legally in the U.S. while protecting them from deportation. Gómez and other bishops want the Deferred Action for Childhood Arrivals program to be extended.

“Archbishop Gomez is a quiet pastor with a powerful voice for immigrants,” tweeted John Gehring, Catholic program director at a Washington-based clergy network called Faith in Public Life. “The first Latino to lead Catholic bishops at a time when the Trump administration is attacking immigrants won’t be afraid to call out racism and nativism.”

Following the election of Gómez, the bishops chose Detroit Archbishop Allen Vigneron, 71, as the new vice president. By tradition, that puts him in line to become president in three years, although he would be close to the mandatory retirement age of 75 at that point.

Like Gómez, Vigneron has criticized some U.S. policies he deemed hostile to immigrants. He is considered a staunch conservative on many other Catholic issues, though some conservatives have complained that he should halt a long-running Dignity Mass in Detroit that advocates full inclusion of LGBT Catholics.

Ordained in 1975, Vigneron was named archbishop of Detroit in 2009 by Pope Benedict XVI. Before that, the Michigan native served as a bishop in Oakland, California.

Gomez was born in Monterrey, Mexico, and studied theology at the University of Navarra in Spain. He was ordained an Opus Dei priest in 1978 and worked in the Galveston-Houston area and in Denver before being named archbishop of San Antonio in 2004. He became archbishop of Los Angeles in 2011.

In August, after a gunman targeting Mexicans killed 22 people at a Walmart in El Paso, Texas, Gómez wrote a powerful statement condemning white supremacy and noting that Spanish was spoken in North America before English.

Also Tuesday, the Catholic bishops voted to authorize development of a “comprehensive vision” for Hispanic ministry, to be completed over the next few years.

While Hispanics account for about 37% of all U.S. Catholics, they are no longer a majority-Catholic group, according to the Pew Research Center. A recent Pew survey said 47% of Hispanics in the U.S. now call themselves Catholic, down from 57% in 2009.

In discussing outreach to Hispanics, many bishops brought up the role of Catholic education.

“I’d like to see you really promote our Catholic schools,” said Cardinal Sean O’Malley, the archbishop of Boston, “But we know that the vast majority of our Hispanic families cannot afford them.”

He suggested the use of tax credits and vouchers to help offset the cost of tuition.

He also suggested building more youth centers for Hispanic children that offer after-school and weekend programs, which he said keep young people “out of gangs” and “close to the church.”

One of the most heated exchanges among the bishops was over whether opposition to abortion should be designated the “preeminent” priority for the church in the U.S.

Some bishops in the conference’s relatively liberal faction expressed concern that this phrasing undercuts Pope Francis’ recent calls for emphasizing other priorities as well.

But an effort to modify the letter failed by a 2-to-1 margin.

“I like the pope’s text, and I believe it — but I am against anyone denying that abortion is the preeminent social issue of our time,” said Archbishop Charles Chaput of Philadelphia.