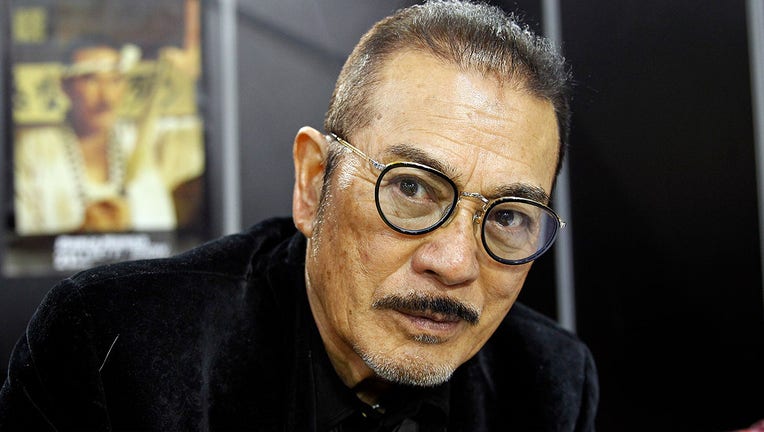 LOS ANGELES - Shinichi "Sonny" Chiba, a Japanese actor and martial arts legend, has died of complications from COVID-19, his managers confirmed to FOX Television Stations Thursday. He was 82 years old.

His office says he died in a hospital while being treated for COVID-19.

"Such tragic news," his friend and manager Timothy Beal said. "He was a great friend and an awesome client. Such a humble, caring and friendly man."

Beal revealed the two were set to work on a feature film together prior to the pandemic entitled "Outbreak Z", which Sonny would have starred in opposite Jesse Ventura and Wesley Snipes.

"I will surely miss him," Beal continued.

Chiba's friend and manager Keya Morgan also told FOX Television Stations, "Sonny Chiba was not just a client, but a dear friend of mine, and we mourn his passing and our prayers are with his children and family. Sonny Chiba was the last of the true Samurais, and a martial arts legend unsurpassed by any other in Japanese history. In the 1960s and 70s he was to Japan, what Bruce Lee was to China. His unique talents, charisma and mastery of the martial arts will live on for eternity."

Chiba was known for roles including "Kill Bill", "The Street Fighters" and "The Fast and the Furious: Tokyo Drift," and inspired many action filmmakers and actors including Quentin Tarantino and Keanu Reeves.

Chiba was born in Japan and began his acting career in television, after being discovered during a talent search by Toi Studios.

He has since starred in more than 125 films for the studio.

Many celebrities and organizations took to social media to show their support for the actor, who has been a major figure and ongoing influence in the passion for martial arts movies for decades.

"In 50 years on screen, Shinichi "Sonny" Chiba grew from actor to fight choreographer to legend. A black belt in six martial arts, he blended toughness with depth in films like "The Street Fighter," "Kill Bill Vol. 1" and "The Fast and the Furious: Tokyo Drift". He will be missed," The Academy, the home of the Oscars, wrote.

Writer and Director Ted Geoghengan also wrote, "The great Sonny Chiba passed away today at age 82, another victim of Covid-19. A martial arts legend with six black belts who started out in tokusatsu TV, Chiba made over 120 movies for Toei and was Japan's most popular action star for decades. Watch one of his films today"

"RIP Sonny Chiba. He was the 2nd biggest Martial Arts star only to Bruce Lee. He was Sensei as well as my @kyokushin brother," actor Michael Jai White wrote.

Chiba won numerous awards in Japan for his acting and will leave behind a legacy that touched the lives of millions of fans worldwide.