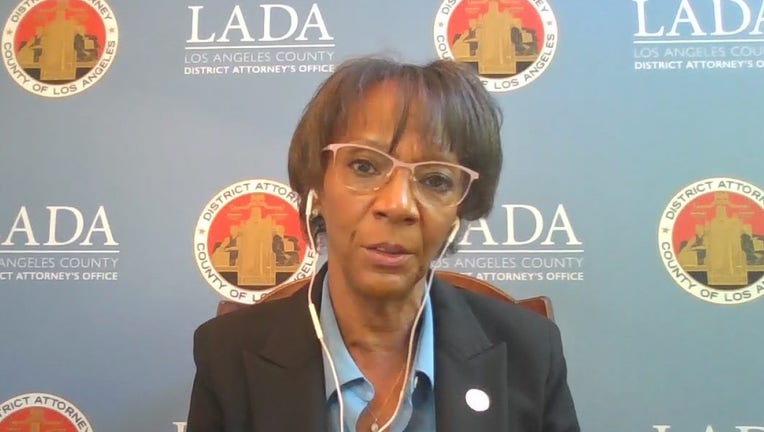 LOS ANGELES - District Attorney Jackie Lacey and her husband were sued Tuesday by Black Lives Matter members over an incident in which the husband of Los Angeles County's top prosecutor pointed a gun at them while they were outside the front door of the Laceys' Granada Hills home in March.

"This lawsuit was filed two weeks before an election and not at any time in the last seven months because it is being put forward for transparently political purposes,'' the statement read. "If there was merit in this lawsuit or if it was being offered sincerely, it would have been filed at some point prior to today.''

— Attorney Jeffrey Zinder issued a statement on behalf of the Laceys.

Abdullah is chairwoman of the Department of Pan-African Studies at CalState Los Angeles and a co-founder of the Los Angeles chapter of Black Lives Matter. She and other BLM demonstrators went to the home where Lacey and her husband David live on March 2, seeking to find out why she had allegedly not agreed as promised to meet with them to discuss issues of community concern.

Earlier in August, the husband of LA County District Attorney Jackie Lacey faced charges for allegedly pointing a handgun out at the couple's home earlier in the year.

David Lacey opened the door after the plaintiffs rang the bell and video images show him pointing a gun and saying he would shoot if the visitors did not get off his porch.

"The plaintiffs ... believe that Jackie Lacey aided and abetted (David) Lacey's decision to cock, load and then point the handgun directly at Dr. Abdullah's chest and at Ms. Ferlito's and Mr. Marks' bodies,'' the suit states.

"The plaintiffs were unarmed and had done nothing to justify this use of deadly force against them.''

The incident occurred a day before the California primary election, which resulted in the 63-year-old Lacey being forced into a runoff with former San Francisco County District Attorney George Gascon as she seeks re-election to the office she has held since December 2012.