Many of the state’s hospitals are now running out of capacity to treat the severest cases.

California’s pandemic death toll now stands at 21,860. The state has also seen the most cases in the nation with more than 1.7 million confirmed.

Earlier, it was reported two people are dying of COVID-19 every hour in California’s most populous county as the state set daily records for newly reported cases and deaths and hospitals struggle to keep up with the surge of coronavirus patients.

Most California residents are under a stay-at-home order because of dwindling intensive care unit capacity where they live. Los Angeles County, home to 10 million people, has 2,500 ICU beds but within a month could easily need far more, said Dr. Christina Ghaly, the county’s health services director.

"Hospitals are under siege and our models show no end in sight," she said.

Southern California and the Central Valley — regions that together include 23 counties — had exhausted their regular supply of intensive care beds and many medical centers were tapping into their "surge" capacity.

California is averaging more than 35,000 newly reported coronavirus cases a day. Health officials estimate 12% of them — 4,200 — end up in hospitals. Records were set Wednesday, with 53,711 new cases and 293 deaths statewide.

The massive rise in infections began in October and is being blamed largely on people ignoring safety measures and socializing with others. More recently, health officials said they’ve seen cases stemming from gatherings during the Thanksgiving holiday and have pleaded with residents to avoid getting together with people from other households over Christmas and New Year’s.

Health officials in Southern California’s Orange County on Wednesday issued an order preventing hospitals from diverting ambulances to other medical centers. Dr. Carl Schultz with the county’s Health Care Agency said ambulances could have run out hospitals to take their patients.

"Therefore, we temporarily suspended ambulance diversion. While this will place some additional stress on hospitals, it will spread this over the entire county and help to mitigate the escalating concern of finding hospital destinations for ambulances," Schultz said in a statement.

Jeremy Zoch, chief executive at Providence St. Joseph Hospital of Orange, said nurses, respiratory therapists and housekeepers have been taking extra shifts to help out during the crush. Registry and traveling nurses have come in and officials are talking to a nearby children’s hospital about using additional space to care for patients, he said. 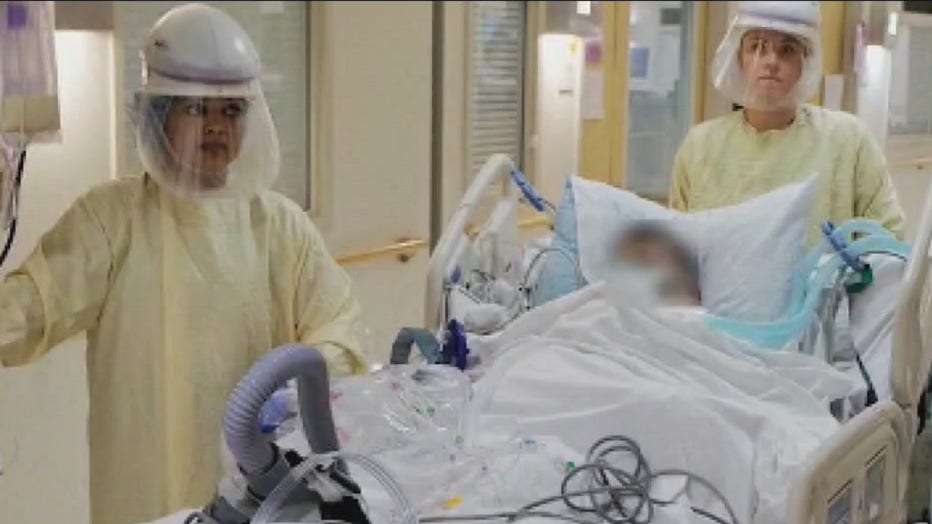 "It has challenged us. So, every single one of our units that we have available to us, we’ve been redesigning them and utilizing them to care for COVID patients," Zoch told reporters. "It is really challenging us on the capacity front. Our ICUs are very close to full."

Hospitals administered the first Pfizer vaccines to health care workers this week as a pair of state advisory committees started making potential life-and-death decisions over who is next in line for the scarce inoculations. The committees are considering whether groups like teachers, farmworkers, grocery workers, ride-hailing drivers and news reporters should be among them.

On Wednesday, California announced the San Francisco Bay Area would join three of the state’s five regions already under a state-mandated stay-at-home order as ICU available beds dropped below 15%. The regions of greater Sacramento, the San Joaquin Valley and Southern California are already under Gov. Gavin Newsom’s order, which closes businesses including hair and nail salons and movie theaters and severely limits retail operations.

The Northern California region, which includes Humboldt, Lake and Mendocino counties, is not affected for now.

Many of the Bay Area’s counties had already applied the order as a precaution and those that hadn’t must now do so on Thursday.

In Santa Clara County, which had already applied the shutdown rules, reported infections are topping 1,000 per day, compared with 300 in July, said Dr. Marty Fenstersheib, the county’s testing director.

"We’re not anywhere out of the woods yet," he said.

Barbara Ferrer, the public health director for Los Angeles County, the state’s most populous, said the transmission of the virus is rampant and noted two people are dying every hour in the county.