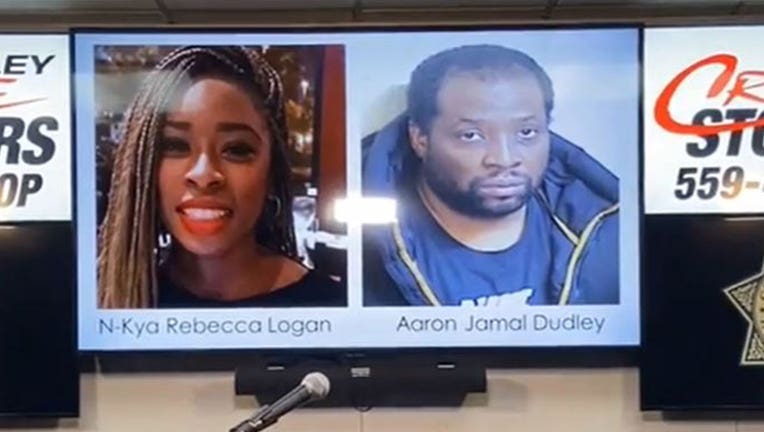 FRESNO, Calif. - A California man has been arrested in the death of his pregnant sister who police said was murdered and set on fire.

Fresno Police said in a Wednesday afternoon press conference that Aaron Jamal Dudley, 41, was arrested in the death of his sister, 26-year-old N-Kya Rebecca Logan. According to police, Logan had been stabbed to death and was then intentionally set on fire.

Police said several pieces of evidence led to the arrest of Dudley, including a crime scene at the home and multiple witnesses who saw the fire.

Investigators believe that Dudley stabbed Logan multiple times with a sharp object while they were inside their home. He then allegedly transported his sister's body in a garbage bin to a nearby alley, before setting her body ablaze.

Authorities said that Logan was 36 weeks pregnant and just had a baby shower on Sunday.

One witness took a picture of the suspect standing over the body, which investigators identified as Dudley.

Police also said that surveillance video from the apartment complex captured images of the suspect pushing the garbage bin through the neighborhood.

Dudley was arrested while he was running away from police at the home.

"He ran from police, which is something very typical of a guilty person," Fresno Police Chief Paco Balderrama told reporters Wednesday.

Balderrama said that police had responded to the house previously in 2021, where Dudley was deemed to be a threat to himself or someone else and was placed on a 72-hour hold. No further information about his criminal background or relationship with Logan was immediately available.