LOS ANGELES - A 23-year-old filmmaker is suing the city of Los Angeles and his uncle, alleging the Los Angeles Police Department officer ordered his nephew shot with projectiles during a downtown protest days after the death of George Floyd. 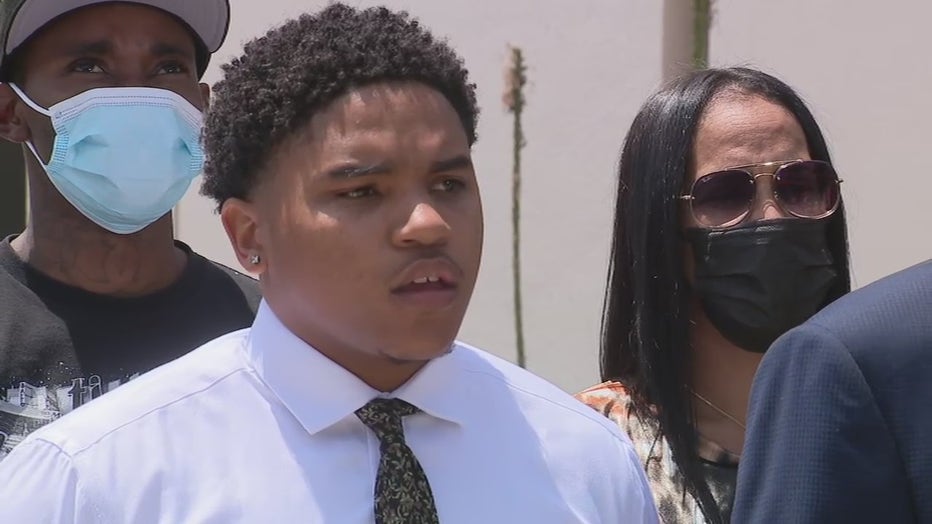 "'Bluer Than Blood' would be the million-dollar title of this tragic tale if it were ever turned into a movie," the suit states. "This lawsuit demonstrates the heart-rending extent to which the current warrior mentality permeates the Los Angeles Police Department, threatening to destroy a Black family to its core from within."

Anderson "turned his trained wrath against a member of his own family, leaving a promising young entrepreneur, his own blood, scarred and reeling in the wake of his malicious attack," the suit states.

Anderson "maliciously punished his own blood for merely calling him out against others protesting the tragic death of (Floyd) an unarmed Black man," the suit states.

Shakir was among hundreds of people peacefully protesting Floyd's death between 9:30 p.m. and 10:30 p.m. last May 29 near Fourth and Spring streets when he saw officers forming a skirmish line extending across Spring Street from one curb across to the other, the suit states. Floyd died at the hands of Minneapolis police four days earlier.

Shakir walked between the officers and the protestors, encouraging the LAPD members "to drop down their arms and join the protesters," including a man who he recognized as his uncle, the suit states. Anderson was directing other officers to fire projectiles at specific protestors, prompting the plaintiff to tell him "that one of their ancestors would be 'turning over in her grave' were she to see him at that moment," the suit states.

Suddenly, Anderson motioned his hand in Shakir's direction and told another police officer to shoot the plaintiff, the suit alleges.

"Mr. Shakir screams out in agony as the projectile damages his right hand," the suit states.

Shakir dropped one of two cellphones he was holding to record the events and when he reached down to pick up the device, he was shot in his buttocks with another projectile, the suit sates.

"Terrified and fearful of further attacks, Mr. Shakir picks up his phone and begins running away from the officers, zigzagging as he runs hoping to avoid being shot again," the suit states.

Shakir went to his nearby apartment, where he was met by friends who took him to a hospital, the suit states.

Shakir, who is Black, believes that police had an unwarranted fear that he "presented a serious threat to someone's safety," according to the suit.