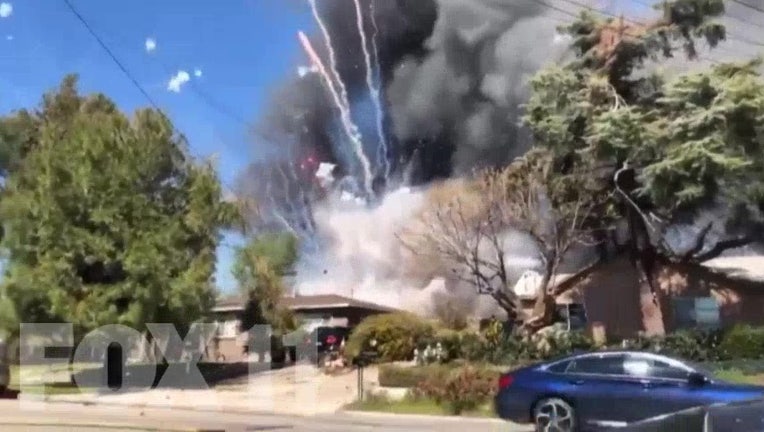 The large blast prompted a mandatory evacuation order to be issued for about 80 homes in the 300 and 400 block W. Francis and the 400 W. Maple Street between Fern and San Antonio Ave.

Over 48-hours after the explosion residents are still unable to return home. But on Thursday some got access to their homes to pick up some essential items, including their pets.

They clutched dogs, rabbits, and all kinds of pets as residents came out of the so called ‘hot zone’.

"He ran out the broken window" explains one teary dog owner, clutching a tail wagging, happily licking, hairy terrier named Jr. He explains they couldn’t grab him before being evacuated. Today, the dog was waiting for them in their soot filled home, hiding under debris; thirsty and hungry but none the worse for the scare.

Residents were escorted in Thursday as bomb squad personnel from local sheriff agencies gathered debris from the explosions.

With the help from the ATF and FBI, authorities have been destroying all unexploded fireworks and munitions, setting off more explosions that have echoed through an already nervous neighborhood.

They still have more to do, so evacuations continue through Friday. As a matter of fact, three large shells are so unstable that bomb experts will leave them where they are and detonate them in place sometime on Friday. They hope to do this before noon and no earlier than 9 a.m., so if residents hear a large boom and see fireworks, know its officials and they have plenty of experts making it safe.

Once the area is cleared the Ontario Police Department will get to sink their teeth into the investigation. They are tracking some of the serial numbers on the unexploded materials to try and track where it came from.

They have answered calls of fireworks before in this area but were never able to capture the people setting them off, which they need to prosecute.

"They don’t do anything because they need to see them do it. Yes, I am upset. I think our whole community, our whole Ontario is upset," said resident Anna Earley.

Fireworks are illegal in Ontario but available in neighboring cities.

A temporary care and reception center was established at the De Anza Community Center, located at 1405 S. Fern. Ave.