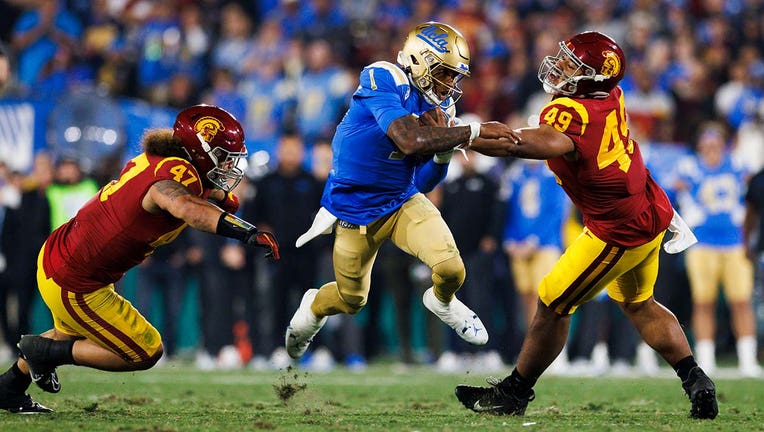 UCLA Bruins quarterback Dorian Thompson-Robinson (1) runs with the ball during the NCAA college football game between the USC Trojans and the UCLA Bruins on November 19, 2022 at the Rose Bowl Stadium in Pasadena, CA. (Photo by Ric Tapia/Icon Sportswi

The bowl season is now three years removed from the last time every postseason game was played.

The pandemic whittled the 2020 bowl season down to a shell. Last year, a December spike in cases led to five games being canceled and some games using replacement teams.

So we step into this bowl season optimistic that all the games will be played, re-upping our annual plea for you to watch all 42. Why?

First, to see who is playing after all the opt-outs.

And if that doesn't get you motivated, we're here to help. So here we go, with early lines from FanDuel Sportsbook:

Why watch? Bowl season starts at 11:30 a.m. ET on a Friday and if you promise to watch you get a half-day at work. No, really. It's, like, a national holiday.

Top-25 teams are in action this weekend in a quadruple header on FOX. (FOX Sports)

Why watch? The only postseason game matching teams with more than the combined 22 victories of the Roadrunners and Trojans is the playoff. This is also the only bowl game matching conference champions.

Louisville vs. Cincinnati (plus 1)

Why watch? Find out which one of these teams Scott Satterfield is coaching now. (Trick question: Neither. Both have interim coaches while he makes the move from UL to UC.)

Oklahoma State vs. Kansas State is one of the featured matchups on FOX this weekend. (FOX Sports)

Why watch? Get a look at some of what coach Deion Sanders is bringing to Colorado.

Why watch? The last bowl game these teams played was one of the most thrilling ever, matching Jim McMahon's Cougars and Eric Dickerson's Mustangs. Yes, it was 42 years ago, but there is precedent.

Why watch? Bulldogs' Jake Haener has been one of the toughest and most entertaining quarterbacks in the country for a couple years. The least you can do is watch his last college game for all he's fought through.

Rice vs. Southern Mississippi (minus 6)

Why watch? Rice is in a bowl game for the first time since 2014 despite a 5-7 record because the Owls get good grades. Support education.

Why watch? This could be one of the biggest moments in Oregon State football history. The Beavers are trying for their first 10-win season since 2006 and their first victory ever against an SEC school (0-11-1).

Why watch? Ever seen a 29-year-old college quarterback? You have one more chance because North Texas' Austin Aune has said he will enter the NFL draft after this game.

Why watch? You thought you'd never see UConn in a bowl game again.

Why watch? The nation's sack leader is EMU's Jose Ramirez. The MAC's defensive MVP is averaging 1.09 per game.

Why watch? You long to spend the winter in Boca and this is the closest you're going to get.

South Alabama (minus 4 1/2) vs. Western Kentucky

Why watch? Find out about South Alabama, maybe the most low-key 10-win team in the country. The Jaguars were a failed fake field goal from winning at UCLA in September.

Why watch? Air Force is the only service academy that qualified for a bowl game. Support the troops.

Houston vs. Louisiana-Lafayette (plus 6 1/2)

Why watch? It's the Friday afternoon of Christmas weekend. You have completed your shopping. You have earned the Independence Bowl.

Why watch? The Demon Deacons seem like the perfect team to play at the home of the Tampa Bay Rays. Like the MLB team, Wake Forest optimizes its talent.

Why watch? The Hawaii Bowl has not been played since 2019 and wrapping presents on Christmas Eve just hasn't been the same without it.

Why watch? Cooper Legas was one of the unexpected heroes of bowl season last year for Utah State, coming off the bench to throw two TD passes in an LA Bowl victory against Oregon State. Now Legas is the starter. Can he pull another upset?

Coastal Carolina vs. East Carolina (minus 8 1/2)

Why watch? Chanticleers QB Grayson McCall has announced he will transfer after the season, but intends to play in the bowl game. It's a new world of college football.

Wisconsin (minus 3) vs. Oklahoma State

Why watch? Both teams had their starting quarterbacks jump in the transfer portal after the regular season. And neither is sticking around for the bowl game. How's that going to work?

Why watch? Duke was one of the best turnaround stories in the country, improving by six victories to go 8-4 under first-year coach Mike Elko.

Arkansas (minus 3) vs. Kansas

Why watch? High probability for a retro-Holiday Bowl with lots of scoring, little defense and a couple exciting quarterbacks in Bo Nix of the Ducks and Drake Maye of the Tar Heels.

Why watch? Check out Rebels RB Quinshon Judkins, who leads all freshman with 1,474 yards rushing.

Why watch? Relive those ESPN cut-ins during college football games to Aaron Judge chasing the seventh-best home run season in Major League history with a bowl game from Yankee Stadium.

Why watch? Are the 'Noles back? QB Travis Jordan and FSU look for their first 10-win season since 2016.

Why watch? Two good teams that could be even better next season. And so begins another offseason of pondering the question: Is Texas back?

Why watch? The last two times Pitt has been in the Sun Bowl it has allowed a combined 17 points — and lost both games. The Panthers should score more than that against the Bruins' porous defense. Maybe by halftime.

Why watch? The winner is going to finish the season ranked. The loser? Maybe not.

Why watch? You can never have enough apps on your phone. You'll need one to stream this game.

Why watch? As you’re watching two teams that would have been in a 12-team College Football Playoff without many of their best players you’ll come to appreciate how much better the postseason will be with an expanded CFP.

Why watch? You watched the Wildcats beat the Hawkeyes 20-17 last season in the Citrus Bowl and thought: "Boy, it would be great to see that game again, but colder."

Why watch? To find out if the Crimson Tide cares about this game. A handy guide: If Alabama wins, yes. If Alabama loses, no.

Why watch? The Bulldogs are playing for the late, great Mike Leach.

Why watch? See the defensive player who will be getting Heisman Trophy hype heading into next season: Tigers freshman LB Harold Perkins.

Why watch? USC, you might have noticed, is not great at that whole tackling thing. Expect a fun showdown between Green Wave RB Tyjae Spears and Heisman winner Caleb Williams, if his hamstring is healed.

Why watch? Another of those wish-it-was-a-playoff-game bowls. But, hey, the sunset looks great.

Why watch? Two of college football's ascending offensive coordinators will be on display in Sherrone Moore of Michigan and Garrett Riley of TCU.

Why watch? The best collection of NFL talent in any game this season.