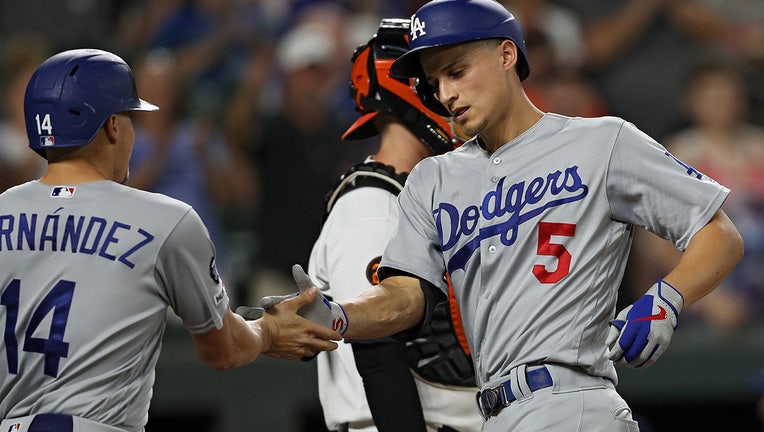 Corey Seager #5 of the Los Angeles Dodgers rounds the bases after hitting a two run home run against the Baltimore Orioles during the third inning at Oriole Park at Camden Yards on September 10, 2019 in Baltimore, Maryland. ( Patrick Smith/Getty Images )

LOS ANGELES (CNS) - The Los Angeles Dodgers assured themselves of their seventh consecutive National League West championship with a 7-3 victory at Baltimore tonight.

This is the earliest the Dodgers have clinched a divisional championship, both by the schedule -- 146 games -- or calendar. The 1977 Dodgers assured themselves of the title in their 151st game. The 2013 team assured itself of the division on Sept. 19.

The Dodgers streak of seven consecutive division championships is the third longest since Major League Baseball began divisional play in 1969.

The Dodgers still have something to play for after clinching the division title -- having MLB's best record and the home field advantage in the World Series accompanying it. With a 94-52 record, the Dodgers trail the Houston Astros and Yankees by 1 1/2 games.

The Dodgers run of division titles has resulted in just two National League pennants -- in 2017 and 2018 -- and no World Series championships. The Dodgers have not won a World Series since 1988.