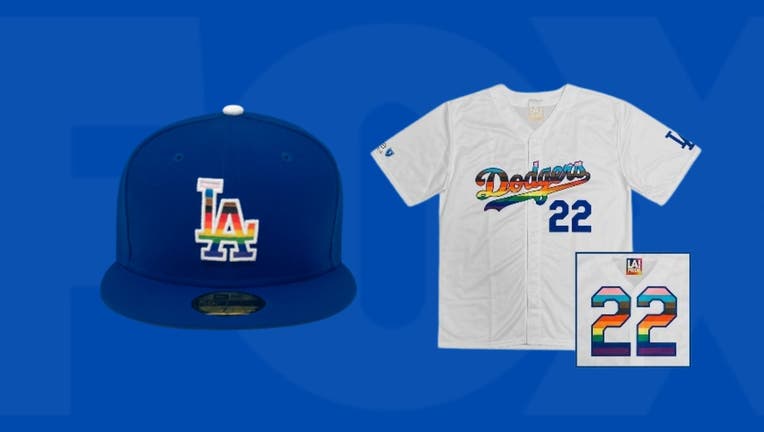 Images courtesy of the LA Dodgers

LOS ANGELES - The Los Angeles Dodgers will host the New York Mets at Dodger Stadium on June 3 for the team's ninth annual LGBTQ+ night, and Monday the team announced a new uniform piece to celebrate the event.

The Dodgers announced Monday that the team will wear new exclusive Pride caps for their June 3 matchup, featuring the interlocking "LA" with the colors of the Pride flag.

"The Los Angeles Dodgers are proud to stand with and recognize the LGBTQ+ community in Los Angeles and globally," Dodgers CSO and President Stan Katsen said.

Pride Night festivities will kick off hours before first pitch, with an LA Pride Kickoff Party at 5:30 p.m. in the centerfield plaza. Before the game, the team will also recognize former Dodger outfielder Glenn Burke, the first openly gay player in MLB, whose family will throw the ceremonial first pitch.

During the game, the Dodgers will donate 50% of the proceeds of the 50/50 raffle to The Los Angeles LGBT Center.

The team will also don the new caps the following week on June 11, when they travel to Oracle Park to take on the San Francisco Giants. The Giants will be wearing their team's Pride caps in that matchup as well.

The new caps will be on sale at Top of the Park and the Left Field Team Store. Additionally, fans can purchase ticket packs for the June 3 game against the Mets which will include a commemorative Dodger LGBTQ+ game jersey.