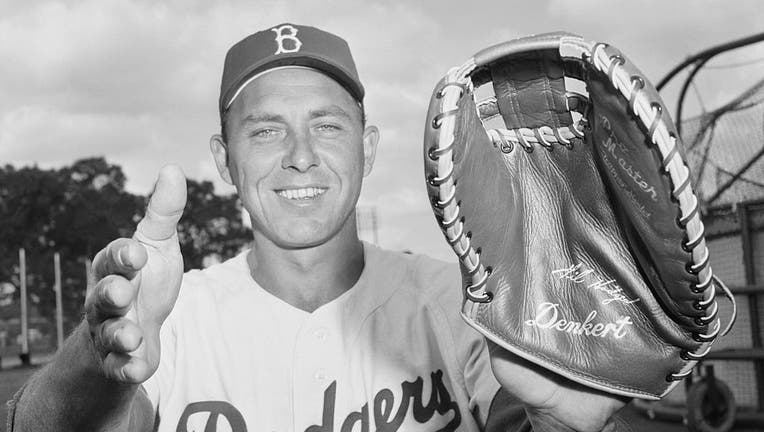 (Original Caption) How Could They Get Away! Vero Beach, Florida: Brooklyn dodger infielder Gil Hodges, who owns a pair of the biggest ball catching hands in the league, gives a close up view of his massive paw and equally king sized first baseman's m

LOS ANGELES - The Los Angeles Dodgers Saturday evening retired the No. 14 worn by Gil Hodges, the power-hitting first baseman on the Brooklyn Dodgers teams of the 1950s, six months after his election to the Baseball Hall of Fame.

Team policy is to limit retiring numbers to Hall of Famers. The only exception to the rule was Jim Gilliam, the longtime Dodger infielder, outfielder and coach whose No. 19 was retired on Oct. 10, 1978, before Game 1 of the World Series, two days after he died from a massive brain hemorrhage at the age of 49.

The number was the 11th in team history to be retired and first since Aug. 14, 1998 when Don Sutton's No. 20 was retired, eight months after his election to the Hall of Fame.

The ceremony coincided with the New York Mets' lone regular-season series against the Dodgers at Dodger Stadium. Hodges concluded his playing career with the Mets in 1963 and managed them from 1968 until his death on April 2, 1972, two days before what would have been his 48th birthday.

Hodges guided the Mets to the 1969 World Series championship after they had never finished higher than ninth during their first seven seasons. 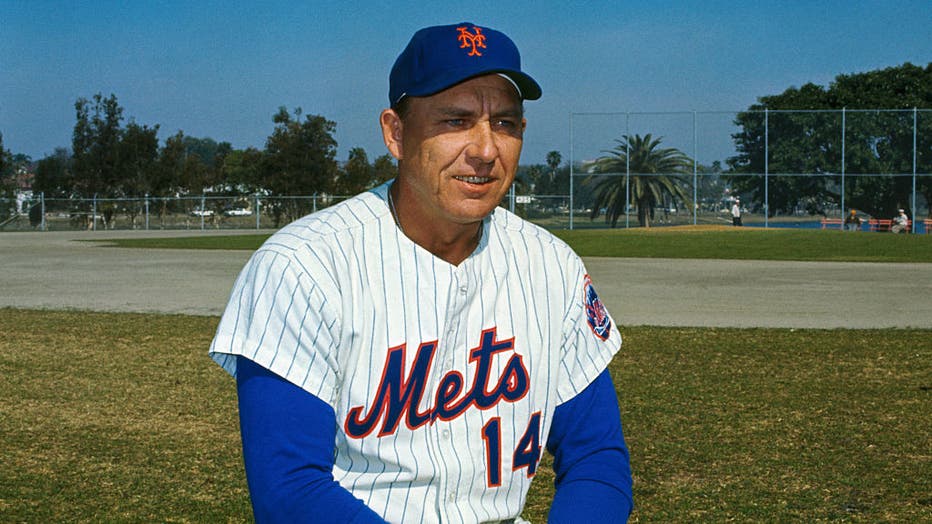 Hodges was elected to the Hall of Fame by the Golden Days Era Committee on Dec. 5, receiving 12 votes — the minimum required for election — from the 16-member committee, which considers candidates whose primary contribution to the game came from 1950-69. He had failed to be elected by the Golden Era Committee in 2011 and 2014.

Hodges was considered for selection by the Hall of Fame's Veterans Committee beginning in 1987, but was never elected. The closest he came to being elected in voting by the Baseball Writers Association of America was in 1983, his 15th and final ballot appearance under rules at the time, appearing on 63.4% of the ballots, with 75% being required for election.

During the era there was no draft, the Brooklyn Dodgers signed Hodges as an amateur free agent on Sept. 6, 1943 and made his professional debut with them on Oct. 3, 1943, playing third base, striking out twice and walking once in three plate appearances in a 6-1 loss to the Cincinnati Reds on the final day of the season.

Hodges spent the next two years in the U.S. Marine Corps. He returned to the Dodgers organization for the 1946 season, playing 129 games for Newport News and leading the Class B Piedmont League catchers in putouts, assists and fielding percentage.

Hodges returned to the Brooklyn Dodgers in 1947, wearing No. 14. The No. 4 jersey he wore in his 1943 major league debut was given to another future Hall of Famer, Duke Snider.

He made seven consecutive All-Star Game appearances from 1949-55, all seasons in which he drove in more than 100 runs, and became an eight-time All-Star in 1957. When Gold Glove awards were handed out for the first time in 1957, Hodges was a recipient, as he was each of the following two seasons.

Hodges played with the Dodgers through 1961 when he was chosen by the Mets in the expansion draft to stock them for their inaugural 1962 season.

Hodges began his managerial career with the Washington Senators in 1963, remaining with them through the 1967 season.