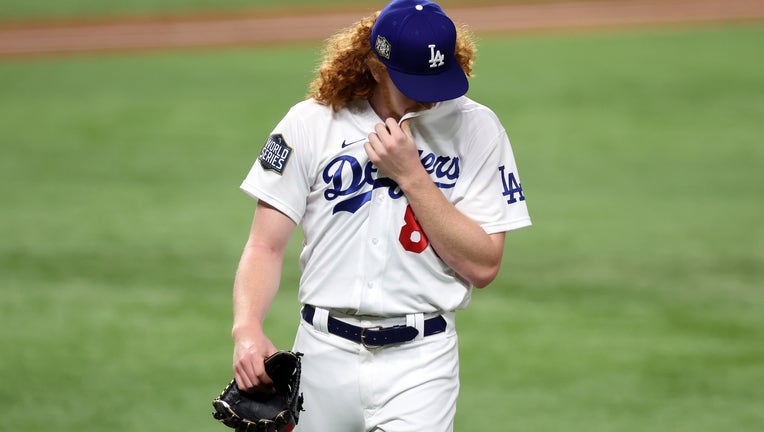 ARLINGTON, TEXAS - OCTOBER 21: Dustin May #85 of the Los Angeles Dodgers walks back to the dugout after the top of the fifth inning against the Tampa Bay Rays in Game Two of the 2020 MLB World Series at Globe Life Field on October 21, 2020 in Arlingt

ARLINGTON, Texas - The Los Angeles Dodgers failed to build off their successful series opener after a disappointing 6-4 loss to the Tampa Bay Rays in Game 2 of the World Series.

Rays pitcher Blake Snell kept the Dodgers hitters at bay, striking out 9 Los Angeles batters in four-plus innings. Snell allowed two earned runs before getting pulled from the mound in the fifth inning.

The Dodgers fell on a 1-0 hole after Los Angeles’ Tony Gonsolin gave up a solo home run to Tampa Bay’s Brandon Lowe in the first inning.

Gonsolin was pulled from the game at the top of the second inning. The 26-year-old righty threw 1 ⅓ innings and Lowe’s homer ended up being the only hit and earned run that Gonsolin allowed in his brief appearance.

The Rays padded their lead to 3-0 in the 4th inning after Tampa Bay's Joey Wendle hit a 2-run double off Los Angeles' Dustin May. Brandon Lowe then smacked a 2-run home run, his second homer of the game, giving the Rays a 5-0 cusion in the top of the fifth inning.

May allowed 3 earned runs in 1 ⅓ innings in relief.

Dodgers' Chris Taylor finally put Los Angeles on board with a 2-run homer in the following frame. However, it didn't take long for the Rays to strike back as Tampa Bay's Ji-Man Choi scored on a sacrifice fly from Joey Wendle to put the Dodgers in a 6-2 hole.

Solo homers from Will Smith and Corey Seager cut the Rays' lead to 6-4 but it wasn't enough for Los Angeles, as the best-of-seven series is now tied 1-1.

The Los Angeles Dodgers may have lost to the Tampa Bay Rays Wednesday in Game 2 of the World Series but it's still not over and Dodger fans are still cheering on the Boys in Blue and hoping for a World Series win.

Related: Taco Bell will deliver on their 'steal a base, steal a taco' promotion for World Series