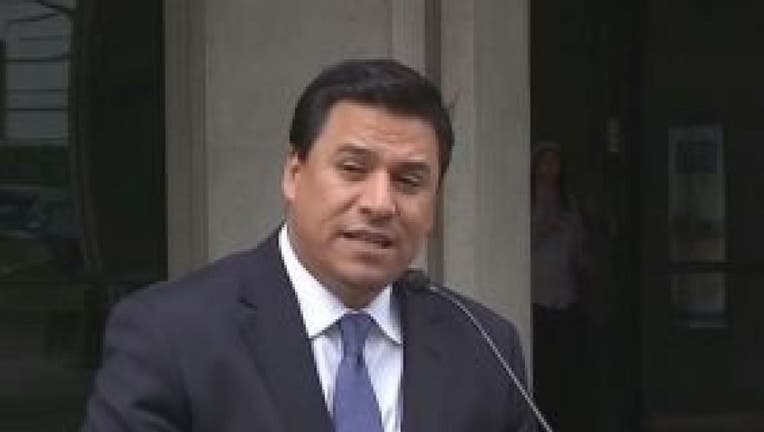 LOS ANGELES - A company has agreed to pay $1.2 million to resolve a federal criminal investigation that focused on the firm's relationship with former Los Angeles City Councilmember José Huizar, who voted to approve its 35-story project in downtown's Arts District, it was announced Thursday.

CP Employer Inc., formerly known as Carmel Partners Inc., agreed to make the payment in a non-prosecution agreement with the U.S. Attorney's Office. The three-year NPA with CP Employer is the latest development in the ongoing investigation into a wide-ranging pay-to-play scheme in which developers bribed Los Angeles city officials to secure official acts to benefit their real estate projects.

Under the NPA, San Francisco-based CP Employer admitted and accepted responsibility for the actions of its employees and agents and agreed to fully cooperate with the FBI's ongoing public corruption probe. The company made the $1.2 million payment last month.

The U.S. Attorney's Office agreed not to prosecute the company for three years, as long as it refrains from any criminal conduct, for a series of reasons detailed in the NPA. Those reasons include CP Employer's acceptance of responsibility for its conduct, a demonstrated commitment to compliance, and cooperation with the government's investigation.

The NPA also notes the company has taken several remedial measures, including enhancing its compliance program, creating a corporate policy against violations of all anti-bribery/anti-corruption laws that will address political contributions and gifts to public officials, and terminating a consultant who later pleaded guilty to criminal charges stemming from the investigation, prosecutors said.

The statement of facts attached to the NPA outlines CP Employer's conduct in relation to Huizar, who faces trial in June on a 41-count racketeering indictment, and real estate development consultant Morris Goldman, who is scheduled to be sentenced in August after pleading guilty last year to brokering deals in which a CP Employer executive agreed to make $50,000 in political contributions in exchange for Huizar's official actions on the company's mixed-use project in the Arts District of downtown Los Angeles.

In the statement of facts, CP Employer admits a series of facts, including:
• Goldman funneled a series of requests from Huizar that CP Employer make contributions to two political action committees for Huizar's benefit;
• CP Employer made three of the four requested political contributions for a total of $75,000;
• the unidentified company official in charge of the Arts District project met with Huizar and agreed to assist with political fundraising efforts to benefit a Huizar relative running for his City Council seat and to obtain information on a person who was "causing problems" for Huizar's family;
• while the executive ultimately did not help with fundraising, the company official obtained the requested background report at company expense and without the knowledge of CP Employer's compliance department or senior management;
• the executive personally delivered the background report to Huizar, at which time, Huizar solicited a $250,000 personal payment in exchange for reducing CP Employer's public benefit payment -- a request that the executive did not act on, but which he withheld from his senior management and the company's compliance department; and
• Huizar sought additional help from the executive -- background information on Huizar staffers and a potential job with CP Employer once he left the City Council -- which the executive did not act on, but again withheld this information from company management and its compliance department.

The statement of facts also outlines how the city's planning commission approved the project in June 2018 with a requirement that 11% of the housing units be reserved for "very low-income" residents. But the Huizar- chaired Planning and Land Use Management Committee approved the project four months later and accepted the company's request to reduce the affordable housing requirement. The committee also voted to deny an appeal of the project that had been filed by a labor union, according to the document.