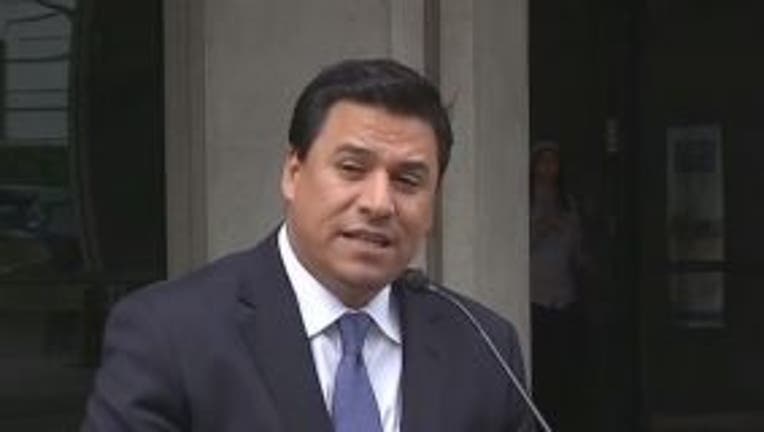 LOS ANGELES - Suspended Los Angeles City Councilman Jose Huizar was indicted by a federal grand jury on 34 counts alleging he ran a pay-to-play scheme in which developers were shaken down for cash bribes and campaign donations in exchange for his help getting high-rise projects through the city's approval process.

The indictment incorporates allegations made in last month's criminal complaint that charged Huizar, 51, of Boyle Heights, with one count of conspiracy to violate the Racketeer Influenced and Corrupt Organizations Act.

Huizar, the central figure in the five-year City Hall corruption probe, is accused of accepting $1.5 million in bribes from developers in exchange for his support of downtown building projects. He was suspended from the council following his arrest in June, and faces arraignment via video conference in Los Angeles federal court on Monday.

The indicment alleges 402 overt acts that Huizar and his co-conspirators committed to further the criminal enterprise, including bribery, honest services fraud and money laundering, according to the U.S. Attorney's Office.

In addition to the RICO conspiracy charge, the indictment charges Huizar with a dozen counts of honest services wire fraud, two counts of honest services mail fraud, four counts of traveling interstate in aid of racketeering, six counts of bribery, five counts of money laundering, and one count each of structuring cash deposits to conceal bribes, making a false statement to a financial institution, making false statements to federal law enforcement, and tax evasion.

The councilman has represented Council District 14, which includes downtown Los Angeles and its surrounding communities, since 2005. Huizar for several years was chair of the city's powerful Planning and Land Use Management
Committee, a position he lost after the FBI executed search warrants at his
city offices and personal residence in November 2018.

During the search of his home, agents seized $129,000 cash that was stashed in Huizar's closet and which, according to the indictment, he received from a Chinese billionaire and another businessperson seeking favors from him.

The indictment alleges that Huizar operated the scheme along with co-conspirators, including an unnamed former general manager of the Los Angeles
Department of Building and Safety and former deputy mayor; George Esparza,
Huizar's former special assistant; and real estate development consultant
George Chiang.

Among the allegations, Huizar is accused of illegally accepting more than $800,000 in benefits from a Chinese billionaire who runs a multinational
development firm and owns a hotel in the councilman's district.

The executive provided $600,000 in collateral to fund a settlement of a sexual harassment lawsuit filed against Huizar by a former staffer, allegations that threatened his 2015 re-election campaign, according to the indictment.

The indictment also alleges Huizar concealed illicit benefits by instructing his special assistant on how to avoid bank reporting requirements, using his family members to launder hundreds of thousands of dollars in bribes, making false statements on a bank loan application, and failing to report the ill-gotten benefits on tax returns and ethics disclosure forms. Huizar also allegedly attempted to influence other witnesses and lied to federal prosecutors and the FBI, prosecutors said.

The charges of RICO conspiracy, honest services fraud and money laundering each carry a sentence of up to 20 years in federal prison. The charge of false statements to a financial institution carries a maximum sentence of 30 years, and the bribery charges each carry a possible maximum of 10 years in federal prison. The charges of tax evasion, structuring, making false statements to law enforcement, and interstate travel in aid of racketeering carry five-year maximum prison sentences.

Huizar is the fifth person to be charged in the ongoing corruption investigation being conducted by the FBI and the U.S. Attorney's Office. The other four defendants have pleaded guilty.

Esparza, Chiang and Justin Kim, a Huizar fundraiser who admitted to facilitating bribes, are scheduled to be sentenced by U.S. District Judge John F. Walter in February. Esparza, Chiang, and Kim are cooperating with the investigation.

Former Los Angeles City Councilman Mitch Englander pleaded guilty on July 7 to charges of scheming to falsify material facts related to trips he took to Las Vegas and Palm Springs that were funded by a businessperson.

Englander's sentencing hearing is scheduled for Dec. 7, also before Walter.