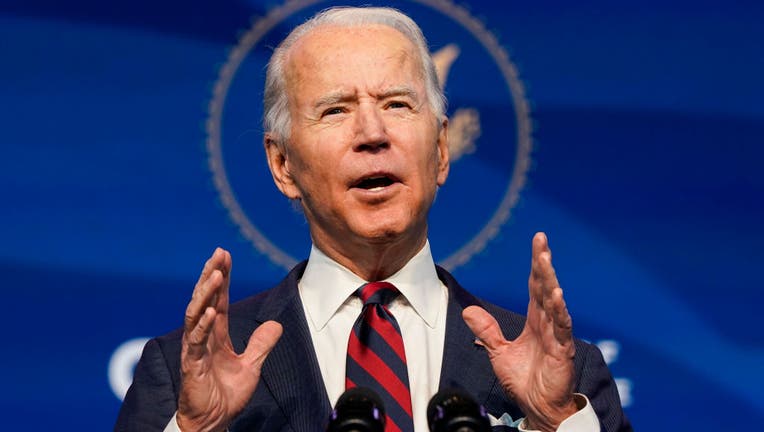 President-elect Joe Biden announces members of his climate and energy appointments at the Queen theater.

WASHINGTON - President-elect Joe Biden’s victory in November was tempered by concerns that he would face Republican opposition in the Senate that could stymie him at every turn.

Those worries eased this past week when Democrats swept two Senate special elections in Georgia, giving the party control of Congress and the White House for the first time since 2011. And the bipartisan outrage over the violent insurrection at the Capitol by pro-Donald Trump supporters could, at least for a moment, ease the partisan tensions that have paralyzed the legislative process for years.

"I think it makes my job easier, quite frankly," Biden said Friday. He said "a number" of Senate Republicans had called call him to say they "are as outraged and disappointed and embarrassed and mortified by the president’s conduct as I am and Democrats are."

Biden ran for office pledging to enact the boldest legislative agenda since the Great Depression, passing everything from a massive stimulus to combat the pandemic to trillions of new spending to address climate change, expand health coverage and tackle economic inequality. To accomplish even a slice of his plans, he will have to expertly navigate a Congress that, while in Democratic hands, is closely divided.

The Senate will be split evenly, with Vice President-elect Kamala Harris casting the tiebreaking vote when needed. The 222-211 Democratic majority in the House is the party’s narrowest in decades.

That means major legislation probably will not advance without at least some Republican support. GOP Sen. Mitch McConnell of Kentucky, the current majority leader, has shown skill in keeping his party united against Democratic priorities.

"We can win simple majorities, but you have to face those 60-vote margins," he said, referring to the number of votes needed to overcome a filibuster.

Biden will also have to cope with higher expectations after Georgia’s results than if he had faced a Republican-controlled Senate. That could lead to battles with progressive Democrats who want to push the new administration further left than it likes.

"Georgia, but obviously the election in November and really the last year, have been the American people saying, ‘We need more. We need more and we want more,’" said Adrianne Shropshire, executive director of BlackPAC, which advocates for economic, justice and political reform. She acknowledged, however, that she does not think major change is "going to be a cakewalk" for Biden.

Adam Green, co-founder of the Progressive Change Campaign Committee, which is closely aligned to leading voices on the left, including Massachusetts Sen. Elizabeth Warren, said that while activists will not get everything they want right away, "the ceiling has just been raised on the possibility of every progressive issue."

Biden, who represented Delaware in the Senate for 36 years, said he was aware of the challenges. In introducing Boston Mayor Marty Walsh as his choice for labor secretary, Biden noted that he gave "serious consideration" to progressive Sen. Bernie Sanders of Vermont.

But the president-elect added that he and Sanders decided against that, lest it cost Democrats a vital vote in a 50-50 Senate, even temporarily.

Democratic Sen. Chris Coons of Delaware, a Biden confidant and someone the new administration is counting on to help coordinate its legislative strategy, said an evenly divided Senate makes some policy goals championed by the party’s most progressive wing "very hard to do."

Even when Democrats had larger congressional majorities after President Barack Obama took office in 2009, they usually needed some Republican support in the Senate for legislation. Even then, they failed to get major initiatives approved on other issues Obama campaigned on, including climate change, immigration and scores of tougher limits on corporate influence in government.

Progressives also have clamored for Democrats to scrap the Senate filibuster rule, which would make things even easier for Biden’s legislative agenda. But Biden has opposed doing that, and Democratic Sen. Chuck Schumer of New York, poised to become the new majority leader, was noncommittal this past week.

That probably means his caucus will have to compromise with Republicans.

Others, though, say now is the time to put major policy initiatives above bipartisanship, especially in an era of such deep political divisions.

Alicia Garza, head of the Black to the Future Action Fund, said the scene of Trump supporters storming the Capitol, "blows out of the water this idea of any kind of ‘Kumbaya’-ing between parties."