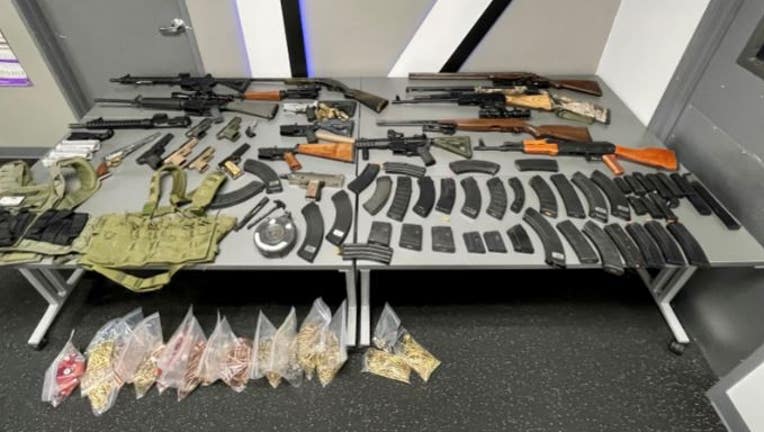 VICTORVILLE, Calif. - A convicted felon was arrested after holding a woman against her will and possessing several firearms.

On July 28, officers with the Victorville Police Department responded to a report of an assault on the 13100 block of Oberlin Avenue.

During their investigation, officers discovered the suspect, identified as Vincent Medina, was holding a victim against her will.

Medina had duct taped the woman in order to prevent her from escaping, physically assaulted her, and tased her several times.

The police department says the victim was able to run away once Medina fell asleep. She was then transported to the hospital for treatment.

Around 11:20 p.m., law enforcement officials served a search warrant at Medina’s house and recovered evidence of the false imprisonment and assault.

In addition, they also recovered 22 firearms, 21 high-capacity magazines, and approximately 5,000 rounds of ammunition.

Police say the suspect is a convicted felon and is prohibited from possessing firearms and ammunition.

Medina was arrested and booked at High Desert Detention Center for false imprisonment, assault with a deadly weapon, inflicting injury on a spouse/cohabitant, and felon in possession of a firearm.

Anyone with information about this investigation is asked to contact Deputy Y. Cardenas or Deputy J. Ortega at the Victorville Police Department at (760) 241-2911 or Sheriff’s Dispatch at (760) 956-5001. Callers wishing to remain anonymous are urged to call the We-Tip Hotline at 1-800-78CRIME (27463) or you may leave information on the We-Tip website at wetip.com.