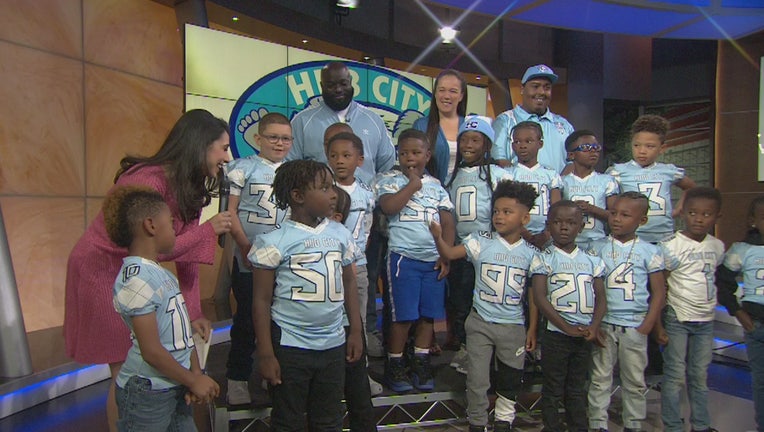 LOS ANGELES - Compton's Hub City Tarheels were no longer left scrambling for thousands of dollars to fund their upcoming national championship game to Florida after two NFL stars and many others stepped in to help. All the contributions have nearly doubled the team's online fundraising goal.

It is incredible how one day can make a difference. After the story of an undefeated youth football team from Compton aired on FOX 11, it went viral and a lot of people stepped in to help, including two well-known NFL players. The team stopped by GDLA to share their excitement and give thanks.

The undefeated 6U Compton team started a GoFundMe page with a goal of raising $15,000 in order to travel to South Florida for their national championship game. They currently hold the title as the King Conference Super Bowl champions and have held that honor for two consecutive years.

On November 11, they were invited to the National Youth Championship in Florida and were informed all funds were due on December 1, according to the team's GoFundMe page.

• Compton football team raising funds, hoping to get to championship game in Florida

Although the team is fierce on the field, they are also "strong advocates of education first!" Players on the roster are required to maintain a minimum 3.1 GPA, which each player has met or surpassed.

The team's philosophy of putting education first caught the attention of NFL star and Compton native, Richard Sherman. The 49ers cornerback donated $5,000 and shared Just One Station's story to his 2.1 million followers.

"You think about the world differently once you're able to get on a plane and see a different part of the world and experience different cities, different states...it really opens up your mind," Sherman said in an exclusive interview with FOX 11's Leah Uko.

Oakland Raiders cornerback Neisean Nixon, who also has Compton roots, shared the story to his followers.

"Just enjoy each other and have fun with it," Nixon advised the Tarheels when he spoke to Uko.

The team had other fundraising goals in place, including asking for donations at Rams game.

"We knew we had to do what it takes," a team spokeswoman said. However, the team was left speechless after they went viral.

"It's an unbelievable feeling," one of the coaches said when the team stopped by Good Day LA.

The team also made an appearance on Just One Station's Facebook page. Many Angelenos posted congratulatory comments.

The team said they wish to thank each and every person who donated and will aim to bring another Super Bowl championship ring home to make their city proud.