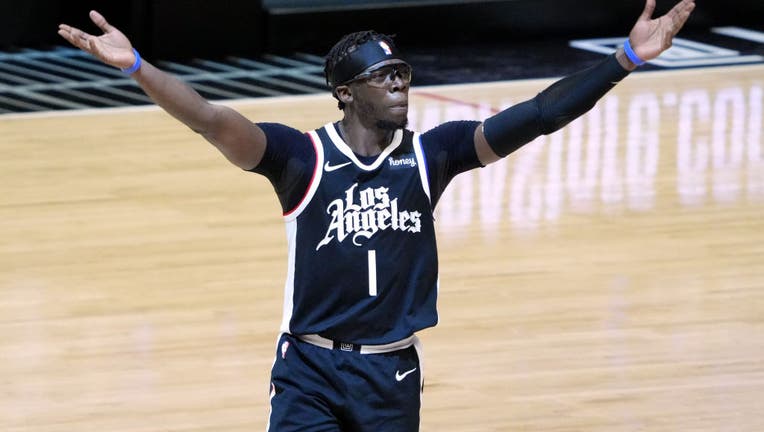 Los Angeles, CA - June 18: Reggie Jackson # 1 reacts after teammate Nicolas Batum (not pictured) of the LA Clippers hit a three pointer against the Utah Jazz in there fourth quarter of a game six of the Western Conference second-round NBA basketball (Getty Images)

"The deal is the maximum LA can pay Jackson under CBA rules," Wojnarowski said in a tweet.

Jackson became a fan favorite and was given the nickname "Mr. June," inspired by the MLB legend with the same name, who many fans know as "Mr. October." Jackson was remarkable in the 2021 NBA postseason and became a consistent offensive machine for the Clips.

Free agent forward Nicolas Batum, who has been turning heads on the Olympic stage for France, is also set to return to the Clippers on a two-year deal.

With Jackson and Batum returning to the squad, the Clippers are making it clear they plan to run it back.

While Jackson’s return is welcoming news for Clipper Nation, it remains unknown if NBA superstar Kawhi Leonard will return. He is expected to miss most of the entire upcoming season after he underwent surgery for a partially torn ACL.

The Clippers have been relatively quiet during the offseason after coming off the most successful season in franchise history. With a loaded roster, they made franchise history when they made it to the Western Conference Finals for the first time. With a healthy Kawhi Leonard, the team arguably would have defeated the Phoenix Suns and went on to play Milwaukee in the NBA Finals.

Now, they continue to look forward.

The Clippers' silent but big moves are quite the contrast from Los Angeles' more decorated NBA team, the Lakers, who have made plenty of noise this offseason.

All-Star and Los Angeles native Russell Westbrook will join the men in purple and gold. In addition, Carmelo Anthony, Dwight Howard, and Trevor Ariza are also set to sign with the team and will join LeBron James and Anthony Davis as the Lakers look to earn the franchise's 18th NBA championship.