The faculty at Chapman University in Orange are speaking out against one of their own professors and say he should be fired. They say their colleague fired up an angry mob at the US Capitol last week.

ORANGE, Calif. - A Chapman University law professor has come under fire for his election fraud claims and participation in a rally led by Trump just before the riot at the U.S. Capitol.

John Eastman, who has been involved in some of the Trump lawsuits seeking to overturn the results of the presidential election, said he left the rally just before it ended and was back at his hotel room to monitor the election certification hearing in Congress as some Trump supporters breached the Capitol.

Eastman stood next to Rudy Giuliani at a "Stop the Steal" rally, where the crowd was urged to march to the Capitol building. 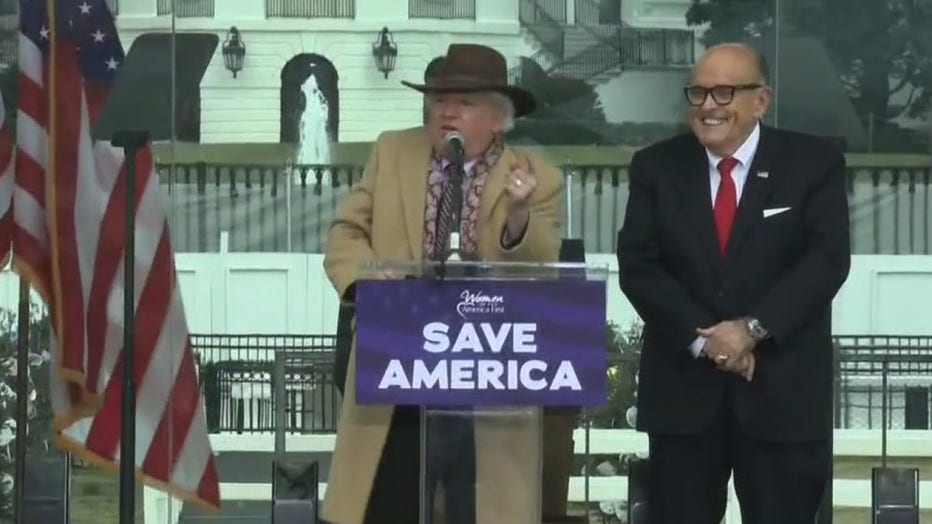 "What I said at the rally last week was true," Eastman said repeating claims that votes were "flipped" on electronic voting machines, which a multitude of election officials have disputed and judges have dismissed.

"It's also not true that what I said at the rally caused anything that went on down the street, which started before the president's speech was even finished," Eastman said, claiming that members of the Antifa movement infiltrated the rally to stir up trouble.

"We have evidence that the initial instigators were Antifa folks," Eastman alleged.

The law professor said it's also "possible" that some of the rioters were Trump supporters, but he rejected "the notion that the president's speech or that over the last month we've raised questions about the validity of the election is itself incitement."

Eastman further contended there has been a "shutdown of any questioning of the election results."  He said the fact that multiple state and federal judges, including theU.S. Supreme Court, rejected challenges to the vote totals does not debunk his claims of election fraud.

He argued that those rulings were on issues of jurisdiction and did not address the merits of the allegations. But Eastman condemned the unrest. "I, in no way, condone the violence that happened in the Capitol, and everyone involved should be prosecuted for the crimes they committed," he said.

Eastman said of the hundreds of thousands of Trump supporters at the rally, most were "enthusiastic, singing, dancing, and some were praying. They came from all over the country to participate."

He blamed the unrest on about "a hundred thugs," who should not be used to "define what was otherwise a fine and peaceful rally... particularly if some of those thugs were brought in."

As for the calls among Chapman University students and academics that he step down, he said, "It's very interesting that people who claim they defend the First Amendment are working overtime to make sure I don't have mine."

Eastman said if his fellow academics "were truly colleagues, they would reach out to me" and ask to see his "evidence" of election fraud.

Eastman said he was not sure whether he wanted to continue teaching at the university in Orange. "That will be decided whether I want to continue to work with these people or not -- it's an open question," Eastman said.

"This week, John Eastman, a member of the Chapman faculty, played a role in the tragic events in Washington, D.C., that jeopardized our democracy," Struppa said. "Eastman's actions are in direct opposition to the values and beliefs of our institution. He has now put Chapman in the position of being publicly disparaged for the actions of a single faculty member, and for what many call my failure to punish and fire him. "If it's determined laws were broken, we will take appropriate action; but based on what we know now, we will abide by the policies in our Faculty Manual which clearly state what actions are protected," he said. "I will not subject the university to further humiliation by taking steps that may cause us to violate our own set of policies, and ultimately lead us to further embarrassment."

Eastman, meanwhile, said he wants a congressional investigation into the claims of election fraud. Without one, "there will never be a fair election again... That's why it's so important to get to the bottom of this. If it was a clean election, then Vice President (Joe) Biden himself would want transparency. If half the country thinks it's stolen, then you need a full and transparent investigation."