Riverside County Sheriff Chad Bianco has confirmed that while he was a lieutenant in 2014, he was a dues-paying member of the Oath Keepers, an anti-government extremist group.

RIVERSIDE COUNTY, Calif. - Riverside County Sheriff Chad Bianco has confirmed that while he was a lieutenant in 2014, he was a dues-paying member of the Oath Keepers, an anti-government extremist group.

The acknowledgment comes following a hack of the organization's website, which revealed the memberships of almost 40,000 members, including some 200 active and retired law enforcement officials.

The Oath Keepers has a reputation as a militia of anti-government extremists, with some members tied to the January 6 riot at the U.S. Capitol.

The sheriff released the following statement to FOX 11:

"In 2014, I briefly joined Oath Keepers with a year membership. Like many other law enforcement officers and veterans who were members, I learned the group did not offer me anything and so I did not continue membership.

I am not currently a member and have not been a member since 2014. My oath is to the Constitution and laws of the land and to the people of Riverside County, who I am sworn to protect."

On Tuesday, Bianco told the Southern California News Group, "I found an email from 2014 where I joined for a year. I don't even remember it. It was an email saying, `Thank you for joining.' I paid for a year's membership."

"I'm not ashamed of what I did in 2014," Bianco told SCNG. He denied having any involvement with the Jan. 6 breach of the U.S. Capitol, saying, "I have been vocally against what happened there. What they did -- the few that went into the building -- was completely wrong and against the law and they should be held accountable for it." 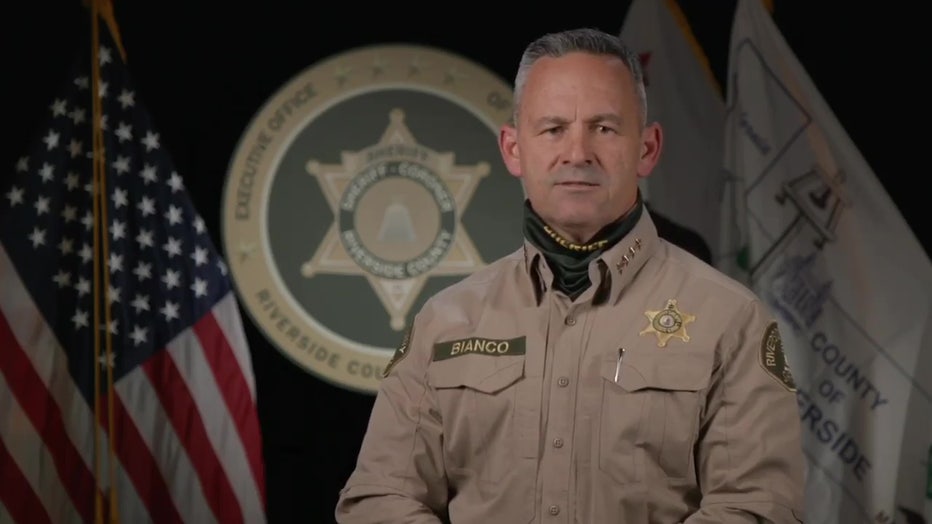 But he dismissed the description of the Oath Keepers as an "anti-government militia," and pointed to what he called far-left militant groups like antifa and Black Lives Matter, which he said have committed acts of violence and vandalism without any backlash from the media or FBI.

"Why was this not done with antifa and Black Lives Matter?" Bianco said. "I lost faith in the FBI a long time ago. The line workers are first rate. Their administration has no business carrying a badge. They strayed from nonbiased law enforcement a long time ago."

Bianco told the news group that Oath Keepers is a group that supports the oath he took as a peace officer and sheriff -- to defend the constitutions of the United States and California and to protect against all enemies foreign and domestic.

"In today's politically toxic environment, if you support the Constitution of the United States of America you are evil -- you're branded as some evil, right-wing conspirator," he told SCNG.

"It is unacceptable and disturbing that Sheriff Chad Bianco is defending his association with the Oath Keepers, a group that is well-known for its involvement with rallies promoting white supremacy, anti-Black and anti-Muslim rhetoric, as well as its recent involvement with the Jan. 6 insurrection," CAIR-LA Policy & Advocacy Manager Fayaz Nawabi said in a statement. "All of these instances make it difficult to trust a public servant who has the responsibility of protecting people, yet defends and supports a group that has endangered the public and our constitution. Any candidate that is associated with the Oath Keepers or any similar organization should be disqualified from serving Riverside County residents."

Bianco has been Riverside County sheriff since 2018. He has made headlines for his adamant stances against COVID-19 mandates throughout the pandemic. The sheriff refused to assign any deputies to enforce the state's mask mandates last year, and he rejected Gov. Gavin Newsom's stay-at-home orders, calling the lockdowns a violation of "constitutional rights."

Last month, he issued a lengthy statement saying he would not enforce a vaccine mandate for sheriff's deputies.

"The government has no ability and no authority to mandate your health choices," he said. "As your sheriff, I have an obligation to guard your liberty and freedom."

Bianco, who along with his entire family recovered from coronavirus infections last winter, emphasized that "I am certainly not anti-vaccine; I am anti-vaccine for me."

"That decision should be made in consultation with your doctor after discussing the potential benefit and the potential negative side effects," the sheriff said. "It is time our government and our politicians come to the realization that the only reason they exist is because 'we the people' formed our government to secure the blessings of individual liberty and freedom."