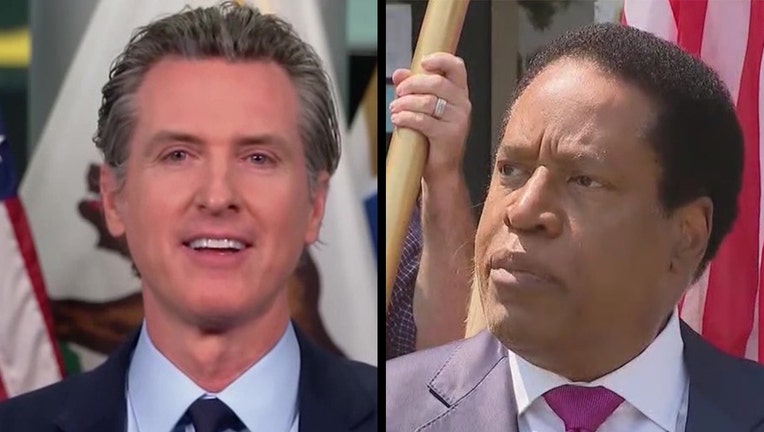 California gubernatorial candidate Larry Elder explained on "Sunday Morning Futures" why he believes embattled Gov. Gavin Newsom "will be out of here" by September 14.

Elder slammed the governor on Sunday for the surge in crime and homelessness in the state as well as the coronavirus shutdowns, which he argued led to a third of all California small businesses shutting down for good.

Elder made the comments as ballots are being sent to voters for California’s gubernatorial recall election of Newsom. In some counties, ballot drop boxes are already open and some election offices are available for early voting, ahead of the Sept. 14 contest.

The 22 million registered voters in the nation’s most populous state have started to receive their ballots amid a surge in campaign activity, as the Republican replacement candidates stepped up their attacks on the Democratic governor and Newsom kicked into higher gear his efforts to encourage Democrats and other supporters to cast ballots.

Most of the latest surveys indicate that Elder, a conservative talk radio host, who jumped into the race about a month ago, is the front-runner among the gubernatorial replacement candidates.

Newsom and his allies acknowledge that they need a strong turnout to counter Republican voters motivated to cast ballots in hopes of ousting the governor.

Earlier this month, Newsom warned Latino supporters about the "consequential nature of this recall" at a get-out-the-vote event in a neighborhood on the east side of Los Angeles.

Elder told host Maria Bartiromo that right now those in favor and those opposed to a recall is "50/50."

"It takes 50% plus one vote to get this guy out," he continued, arguing that Independent voters and the majority of Hispanics who voted for him two years ago "now want him out."

Recent public opinion polls indicate those likely to vote in the recall contest are divided on ousting Newsom. The surveys also point to how crucial turnout will be in a state where registered Democrats greatly outnumber registered Republicans. One of the recent surveys, a UC Berkley Institute of Governmental Studies/Los Angeles Times poll conducted three weeks ago, indicated that Republicans appear to be more motivated to cast ballots in the recall contest. Although Republicans only account for roughly a quarter of all registered voters in California, the poll suggested they made up a third of those most likely to vote in the recall election.

People are now leaving, crime is up, homelessness is up, the cost of living is out of control," Elder told Bartiromo.

"The fires are worse because he’s not properly managed the forest. We’re have rolling brownouts for crying out loud in California."

"You add it all up and many Californians want this man [Newsom] to go, and I believe September 14th he’ll be out of here," he continued.

The governor and his political team for months have framed the recall drive against him as an effort by the far right, Trump supporters, national Republicans and conservative media to oust him. In recent weeks, they've blasted Elder in press releases, fundraising emails and social media posts, highlighting his opposition to a minimum wage and his downplaying of climate change and the nation’s issues with racial inequity.

Larry Elder's ex-girlfriend is speaking out after the California gubernatorial candidate is accused by his other ex of brandishing a gun.

Newsom said last week that it’s "important to focus on Larry" because he argued that he's "even more extreme than Trump in many respects."

Elder told Bartiromo on Sunday that if elected, he will repeal mask mandates and vaccine mandates for state workers. He also said he will be "committed" to reversing cashless bail in California as well as the "ridiculous defund the police movement."

Elder pointed to a recent crime in his state where former Sen. Barbara Boxer was attacked and robbed of her cell phone last month while in Northern California, according to a Twitter post from her account.

Boxer, a Democrat from California, was in Oakland's Jack London Square neighborhood when someone pushed her in the back and took her phone, according to the tweet.

Elder also noted that "the Oakland police chief, just days earlier, complained about the fact that a bunch of money was being diverted from his department."

"All of that is going to be reversed when I become governor of California," Elder stressed.

In an ad released this month, Newsom spotlighted Elder's stance on combating the coronavirus pandemic, charging that if elected he "would eliminate vaccine mandates on Day One, threatening school closures and our recovery."

The recall push was launched in June of last year over claims the governor mishandled the state's response to the pandemic. The effort was fueled by the state's COVID restrictions on businesses and houses of worship, school shutdowns and even opposition to the state's high taxes. But the effort surged in the autumn after Newsom’s dinner at an uber-exclusive restaurant, which – at best – skirted rules imposed by the governor to prevent the spread of the coronavirus.

There are 46 replacement gubernatorial candidates on this year’s recall ballot.