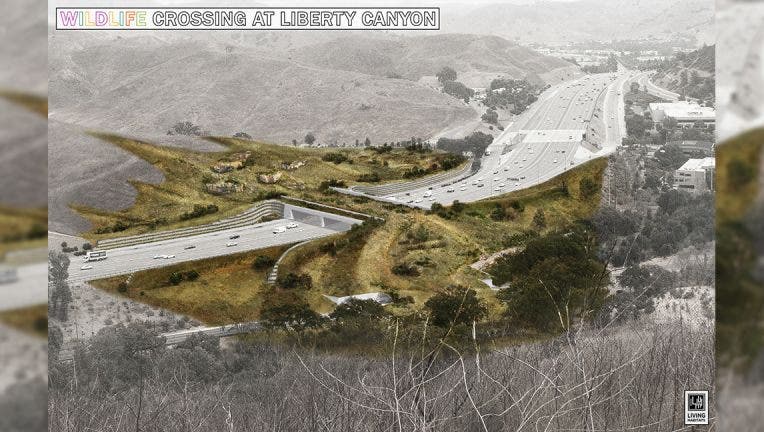 LOS ANGELES - A plan to build a bridge over a major Southern California highway to enable mountain lions and other wildlife to move between wilderness areas has received a $25 million challenge grant to advance the project, organizers said Friday.

The challenge grant from Wallis Annenberg and the Annenberg Foundation to the National Wildlife Federation’s "SaveLACougars" campaign would raise donations so far to $44 million but requires that another $35 million be raised.

RELATED: Campaign to build crossing bridge for wildlife to get across 101 Freeway safely raises $18 millions

The proposed wildlife crossing would be built west of Los Angeles at Liberty Canyon, stretching over 10 lanes of the heavily traveled U.S. 101 freeway and an access road to connect the Santa Monica Mountains on the south to hill country to the north.

The federation hopes to break ground on the crossing in November.

Southern California’s wilderness areas are extremely fragmented by freeways, roads and development that form tremendous — and often deadly — barriers to the movement of animals.

In particular, mountain lions in the Santa Monica Mountains are at risk of losing genetic diversity because of the difficulty of dispersing.

"There’s a reason I wanted to support this crossing and issue this challenge: We need to move beyond mere conservation, toward a kind of environmental rejuvenation," said Wallis Annenberg, chairman, president, and CEO of the Annenberg Foundation.

SUGGESTED: 'It's working!' Video shows wildlife crossing bridge built for them to get across highway safely

A bridge built to help get wildlife across the interstate safely is apparently working in Utah. (Credit: Utah Division of Wildlife Resources)