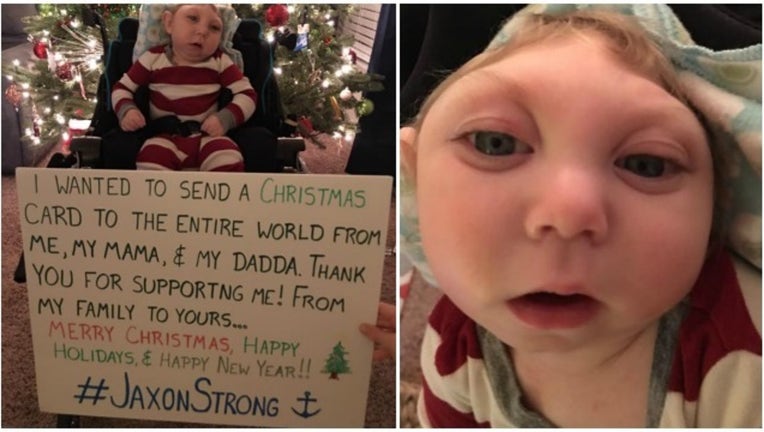 An amazing little boy, who was born with an extreme incurable brain malformation, has shared a Christmas card for all to read.

Jaxon Buell was diagnosed with microhydranencephaly after he was born in Orlando, Florida. The 1-year-old baby's parents were told he might not survive past birth.

"Jaxon has already shown how strong, smart, and special he is, accomplishing feats that doctors doubted he'd ever be able to do, shows improvements each and every day, and just reached a miraculous milestone in celebrating his firsh birthday," his family said on Facebook. "Ultimately, Jaxon will need a miracle long-term."

The family said they have received criticism for not aborting their baby, but the family has responded saying the decision to keep their son was "only our choice."

Jaxon has most of his brain, but it's smaller than normal, according to his family. They said he could survive for many years and he's beginning to walk and speak.

Last week, Jaxon's parents shared some heartwarming photos of their son as they gear up for Christmas. One of the images included Jaxon holding a sign that reads:

I wanted to send a Christmas card to the entire world from me, my mama & my dada. Thank you for supporting me! From my family to yours… Merry Christmas, Happy Holidays & Happy New Year!! #JaxonStrong"

Brandon Buell, Jaxon's father, said his son had one of the best days on Sunday. The little boy got to meet Santa Claus for the very first time and later that day watched "Rudolph."

The family asks that you continue to keep their son in your thoughts and prayers. A GoFundMe page has been set up to raise money for his treatment. If you would like to donate to "Jaxon Strong" click here.