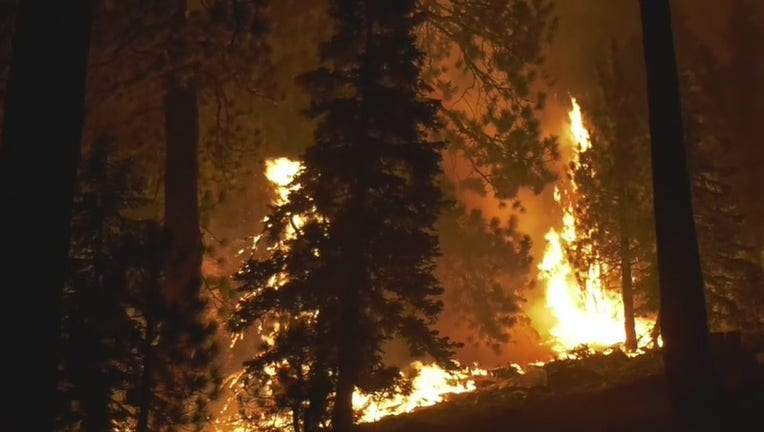 LOS ANGELES - The 115,796-acre Bobcat Fire may have been caused by vegetation coming into contact with a Southern California Edison overhead conductor, the company said Monday in a letter to the California Public Utilities Commission.

U.S. Forest Service investigators have not discussed the details of the investigation with SCE, but the company told regulators, "SCE understands that in addition to retaining SCE's overhead conductor, USFS also removed and retained three tree branches in the area."

"SCE is investigating the cause of the ignition and the 12:16 p.m.relay on its system, and evaluating whether vegetation in the area could have been a factor, including whether vegetation may have encroached within the minimum clearance distance or contacted the section of the overhead conductor retained by USFS."

The fire was reported near Cogswell Dam in the Angeles National Forest at 12:21 p.m. on Sept. 6, and a section of SCE's Jarvis 12 kV circuit in the area experienced a relay operation at 12:16 p.m., SCE reported.

A camera at Mount Wilson captured smoke in the area as early as 12:10 p.m.

On Sept. 16, SCE removed a 23-foot-long line of the conductor for theU.S. Forest Service to use in their investigation.

The fire's containment reached 92% Sunday, as more than 300 firefighters continued to work the 115,796-acre blaze that's been burning for over a month.

The full containment date for the fire is projected to be Oct.30.

The Nature Center at the Devil's Punchbowl Natural Area was destroyed, according to Los Angeles County parks officials.

A map, compiled from ongoing field damage inspection and subject to change, can be viewed at lacounty.gov/recovery/damage-inspection.

All evacuation orders have been canceled and most roads have been reopened, with the exception of Big Santa Anita Rd (the Chantry Road).

Temperatures gradually cooled over the weekend, but increased to the 90s and low humidity Monday, increasing fire danger.

The cost of fighting the fire has not been determined.