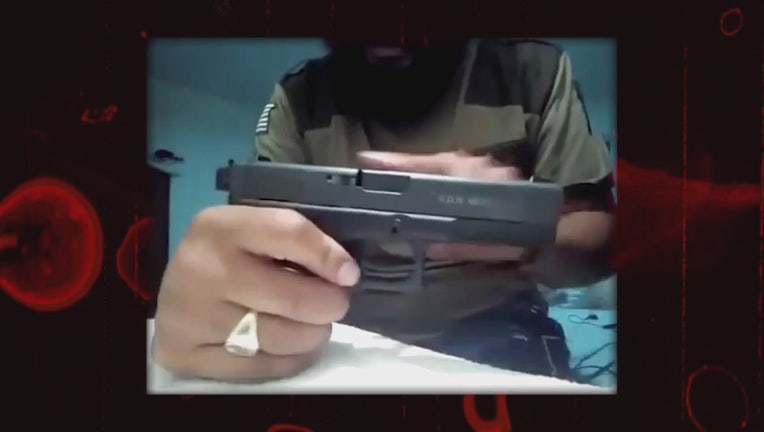 LOS ANGELES - The ATF is scrambling to hunt down thousands of illegal machine gun conversion switches being illegally imported into the United States from China, hundreds of which were recently found and recovered in deceptively labeled packages at the LAX port of entry.

The ATF is scrambling to hunt down thousands of illegal machine gun conversion switches being illegally imported into the United States from China, hundreds of which were recently found and recovered in deceptively labeled packages at the LAX port of entry.

“What it does is it makes a semiautomatic pistol into a fully automatic handheld machine gun,” said special agent Carlos A. Canino of ATF Los Angeles.

Canino tells FOX 11 the illegal selector switches are being smuggled into the United States from China. He said the ATF has tracked and identified around 4,000 of the switches here in the US, but have only recovered 3,100 of them.

Hundreds of the switches were recently discovered at Los Angeles International Airport.

According to a LAPD search warrant filed in September that was obtained by FOX 11, CBP agents had identified three entities in China that were shipping fully automatic Glock conversion switches into the United States.

The warrant states that the packages were deceitfully mislabeled as “multitool switch”, “switch”, or “screwdriver”, and when CBP searched more than 200 packages with these labels at the LAX port of entry, every single package contained the illegal switches.

“They’re packaged up in China, they’re mislabeled to avoid detection, car parts, tools, screwdrivers, you name it, and that’s how they come in,” Canino said.

One of the people accused of receiving some of the illegal switches is a Pacoima man named Jesus Arrizon Jr.

According to a LAPD search warrant, in October, officers responded to Arrizon’s home after he accidentally shot himself. While there, officers found more than two dozen firearms, some of which were illegally modified. They found unserialized AR 15 lower receivers to make ghost guns, and also recovered five of the illegal full automatic conversion switches.

Arrizon was arrested this month and charged with over a dozen felonies, accused of possessing and manufacturing assault weapons, and possession of a machine gun.

He has pleaded not guilty, and his attorney tells us Arrizon is looking forward to his day in court to prove his innocence.

“We have seized ghost guns with these converters or switches attached to them,” Canino said. “At least thirty percent of guns seized in our vaults here at the Los Angeles field division, thirty percent of those firearms are unserialized home made firearms.”

And when those untraceable firearms are equipped with the illegal switches to become full auto, the bad guys want to get a hold of them.

“Los Angeles is the backyard of the Sinaloa cartel, there are individuals here who cater to that clientele,” Canino said.

One video posted online from Mexico shows a fully automatic Glock being used in what appears to be a cartel execution.

“There is no legitimate use for this part, other than making a Glock fully automatic,” Jeremy Ma said. “Buying one pretty much puts you on the prosecution radar.”

Ma is an Army veteran and avid gun enthusiast who has built and registered his own legal ghost guns. He says responsible gun owners like himself are avoiding the illegal switches like the plague.

“Anyone who is aware of the machine gun laws in the United States would be aware that possession of such a part is a felony punishable by 10 years confinement,” Ma said. “I’m inclined to agree with the law in this case.”

And as for the ATF, they say they’re working with China, CBP, and Homeland Security Investigations to fight an uphill battle, and stop the influx of these illegal switches into the United States.

“People are working on it, but again, it’s a tough thing to stop,” Canino said.