Police say they have seen at least five incidents where thieves used tracking devices, like Apple's AirTag, to track cars parked in public area in order to steal them when the cars are parked at home.

Car thieves are turning to high-tech methods to steal high-end vehicles, according to police in one region of Canada.

Here's what you need to know about this latest car theft method.

What are the thieves doing?

According to police in the York Region, which is located in the Ontario Province, they have identified a new method that is being used by thieves to track and steal high-end vehicles.

"Since September 2021, officers have investigated five incidents where suspects have placed small tracking devices on high-end vehicles, so they can later locate and steal them," read a portion of the statement. "Brand name ‘air tags’ are placed in out-of-sight areas of the target vehicles when they are parked in public places like malls or parking lots. Thieves then track the targeted vehicles to the victim’s residence, where they are stolen from the driveway."

Police in the York Region did not explicitly say the brand name, but in a photo provided by police, an Apple AirTag that prominently features the Apple logo can be seen. 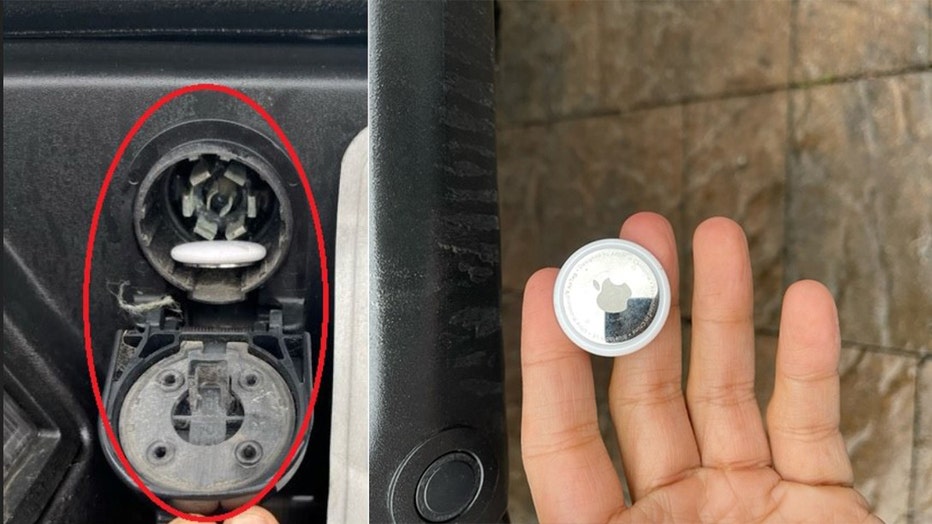 Are we seeing similar problems in the U.S.?

According to a report by FOX 10 sister station WAGA-TV in Atlanta, Georgia, an Atlanta Police officer once found an AirTag placed near the gas tank of a car. However, they did not elaborate if the AirTag was being used in a similar manner as the one described by police in Canada.

An Associated Press article published in April 2021 describes AirTags as a "coin-sized devices that can be attached to keys, backpacks, purses and other items to help people track them down via iPhone if they’re misplaced."

There are privacy-related concerns surrounding AirTags. According to the WAGA-TV report, a viral video showed a woman who allegedly found an AirTag attached to her car without her knowledge.

"These AirTags are getting used to track other people and that's a big problem," said Dr. Brendan Saltaformaggio, a cybersecurity professor with Georgia Tech.

What should drivers do?

Dr. Saltaformaggio also says if you happen to discover an AirTag is moving with you, you should look for it, and alert law enforcement.

"The tag knows if it's following someone other than the owner of the tag. The tag can either make a noise," Dr. Saltaformaggio said. "Or if you have a newer iPhone, it can send a message to your iPhone and alert you that the tag is nearby."

Wait. Couldn't AirTags be used to track a stolen car?

At least one article says that could be a use for AirTags.

According to an article published by FOX News in Aug. 11, someone in New York used AirTags to find his electric scooter in Brooklyn. New York City Police Department officials confirmed the main details of the account were accurate.

The Associated Press (AP) contributed to this report. This story was reported on from Phoenix.