LOS ANGELES - “California’s data and privacy rights rules can serve as a model for the rest of the country.”

Months after running a Presidential campaign focused on “math,” technology, and the rise of automation, businessman Andrew Yang spoke exclusively with FOX 11’s Elex Michaelson about data protection and his new role working to pass Proposition 24.

“It’s the kind of thing that’s going to help Californians feel like our data is ours,” said Yang, who this week was named advisory board chair for Californians for Consumer Privacy, the organization leading the fight for November ballot initiative, “because right now, our data is getting sold and resold by companies and data-burglars for tens of billions of dollars a year, and we’re not seeing a dime of it.”

Proposition 24 is one of 12 statewide ballot measures that Californians will vote on in November.

Also known as the California Privacy Rights and Enforcement Act of 2020, Proposition 24 seeks to build upon 2018’s California Consumer Privacy Act, requiring businesses to allow consumers to opt-out of having their personal data shared, to obtain permission before collecting data on minor users, and more. 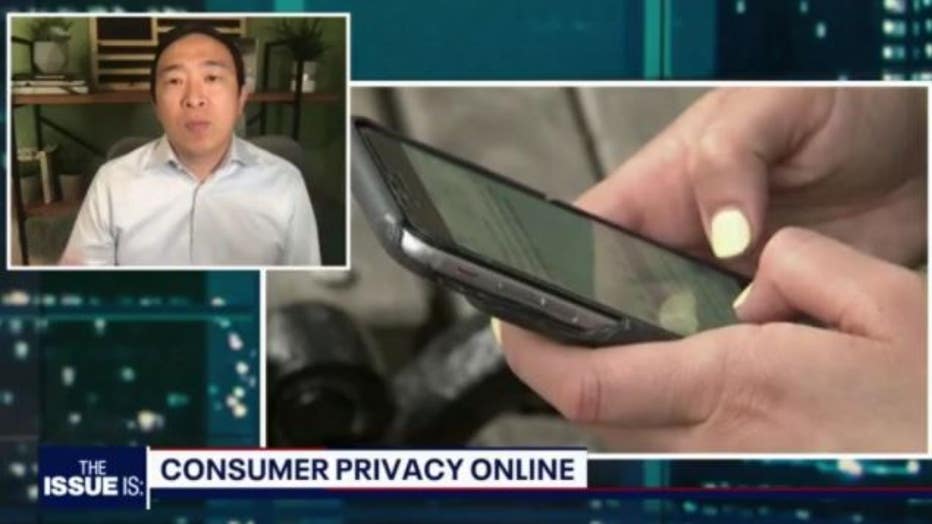 “Proposition 24 sees to it that your data and privacy rights are yours,” Yang explained. “You can opt out of geo-targeting so they can’t tell where you are… if they negligently handle your data you can actually bring some kind of suit against them, and there’s a new data protection agency envisioned in this law that’s actually going to be working just on people’s data and privacy rights.”

“This is a major step forward,” Yang continued. “And you know it’s a good thing, because a lot of the tech companies don’t like it.”

But it’s not just tech companies that have come out against the Proposition, Michaelson pointing out bipartisan opposition that ranges from the ACLU of California and labor leader Dolores Huerta to the Editorial Board of the OC Register.

“The last thing California needs is another state regulatory agency that burdens businesses, especially now, as they adapt to an increasingly online model,” the OCR Editorial Board wrote in an August 20 op-ed that called the measure “misguided” and “overly complicated.”

Yang pushed back against the criticism.

“What I’d say to California voters is ‘what’s happening to your data right now? Do you think that the tech companies and the data-brokers are looking out for you?” he asked. “Proposition 24 is a way to activate people’s data rights, so there’s actually a watchdog working on your behalf, where, right now, there is nobody.”

In a wide-ranging interview on The Issue Is, Yang also discussed the growing support in a number of cities for his cornerstone Universal Basic Income proposal, his advice for how Joe Biden can authentically connect with voters, and his efforts to ensure that Democrats win big come November.