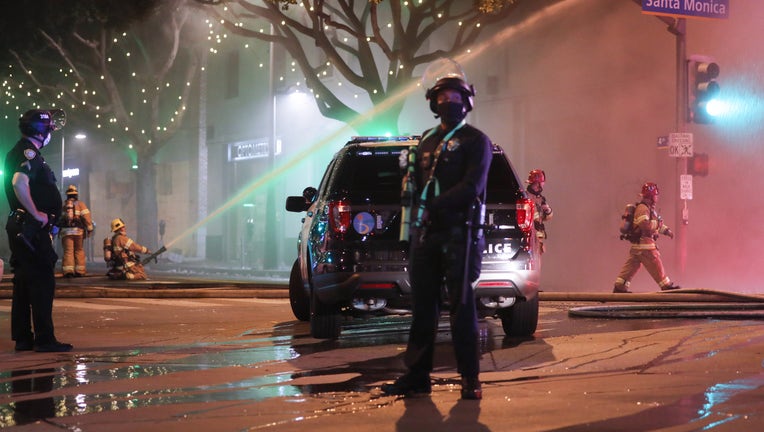 SANTA MONICA, CALIFORNIA - MAY 31: Police stand guard as firefighters work to extinguish a fire at a section of shops looted amid demonstrations in the aftermath of George Floyd’s death on May 31, 2020 in Santa Monica, California. (Photo by Mario Tam

SANTA MONICA, Calif. - Over 400 individuals were arrested Sunday night in Santa Monica after a night filled with looting and unrest, but officials say 95% were individuals who traveled to the city.

Santa Monica Police Chief Cynthia Renaud announced the number of arrests Monday morning during a press conference, stating that the actions did not represent the city itself or its residents.

The arrest charges ranged from looting, assault with a deadly weapon, assault on a police officer and curfew violations. The city imposed a 4 p.m. curfew Sunday as a result of the looting, but authorities didn't begin to enforce the curfew until later in the evening. It was unclear exactly how many arrests were related to curfew violations.

Santa Monica will impose another curfew at 1:30 p.m. Monday for residents citywide that will remain in place until 5:30 a.m. Tuesday.