In a letter to Pelosi, D-Calif., the nine said they "will not consider voting" for a budget resolution mapping Democrats' ambitious fiscal plans until the House approves a separate, Senate-passed package of road, broadband and other infrastructure projects and sends it to Biden.

That's the opposite of Pelosi's current strategy. She's repeatedly said her chamber won't vote on the bipartisan, $1 trillion infrastructure measure that moderates covet until the Senate sends the House a companion, $3.5 trillion bundle of social safety net and environmental initiatives favored by progressives.

Progressives have applied their own pressure, saying many would vote against the infrastructure measure until the Senate approves the separate $3.5 trillion social and environment bill. That larger measure is unlikely to be ready until autumn.

The moderates’ demands were the latest challenge Biden and Democratic leaders will have to manage as they try pushing the president’s expansive domestic priorities through a Congress their party dominates by just paper-thin margins.

Democrats control the House by just three votes, giving virtually all 220 of the party's lawmakers tremendous leverage. They run the 50-50 Senate only with Vice President Kamala Harris' tie-breaking vote. 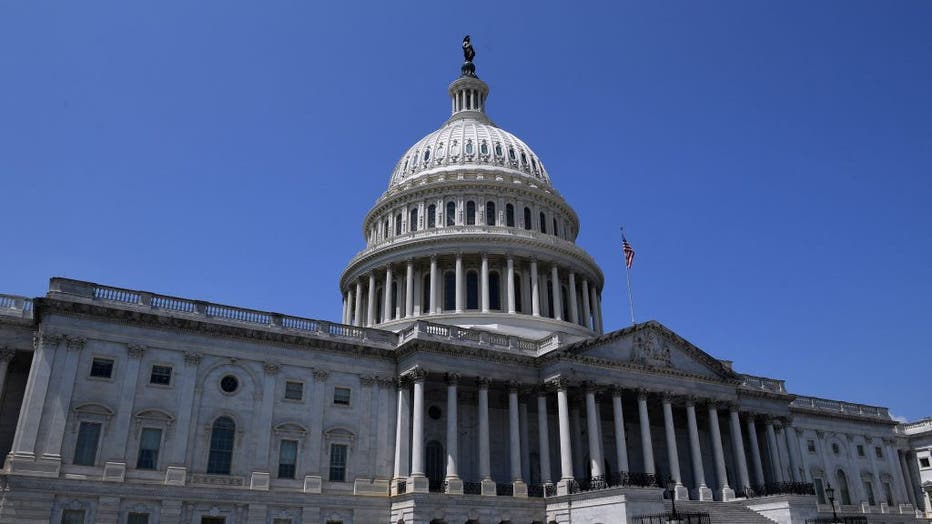 The US Capitol is seen in Washington, DC, on August 11, 2021. (Photo by OLIVIER DOULIERY/AFP via Getty Images)

Democrats have too much at stake to let internal turmoil sink their domestic agenda, but it was initially unclear how leaders would resolve the problem. Biden, Pelosi and Senate Majority Leader Chuck Schumer, D-N.Y., who faces a similar moderates vs. progressives balancing act in his chamber, may have to present a united front about how to untie their knot and pressure rank-and-file lawmakers into line.

Biden consulted with his legislative affairs team Friday about his economic agenda's pathway in the House, the White House said..

The House returns to Washington from its summer recess on Aug. 23 to vote on the budget resolution and perhaps other legislation, giving Biden, Pelosi and other leaders time to decide their next move.

Together, the infrastructure and social and environment bills make up the heart of Biden’s governing goals, and their enactment would likely stand as one of his legacy achievements as president. But neither wing of his party in Congress fully trusts the other to back both packages, so leaders want to sequence votes in a way that gives neither faction an edge.

Pelosi, first elected to Congress in 1987 and her party's House leader since 2003, is a seasoned crisis manager and vote counter who Friday was showing no signs of backing down.

Asked about Pelosi’s next move, a senior House Democratic aide said the party doesn’t have enough votes to pass the infrastructure bill this month. The aide contrasted the nine moderates with the dozens of progressive Democrats who would vote against that measure unless it comes after the House gets the Senate’s $3.5 trillion social and environmental bill.

The aide was not authorized to publicly discuss the party’s internal dynamics and spoke on condition of anonymity.

Congressional passage of the budget resolution ultimately seems certain because without it, Senate Republicans would be able to use a filibuster, or procedural delays, to kill it.

The Senate approved the $1 trillion infrastructure bill on Tuesday with a bipartisan, 69-30 vote. Hours later, the chamber approved the budget resolution on a party-line 50-49 roll call, telegraphing the partisan pathway the subsequent $3.5 trillion social and environmental bill faces.

Moderates, including many who represent swing districts and face competitive reelection races next year, are leery of that huge bill because of its massive price tag. Democrats plan to pay for much of its costs with tax boosts on the wealthy and large corporations and want it to include provisions crafting a pathway to citizenship for millions of immigrants in the U.S. illegally, which also worry centrist Democrats.

Two of the Senate's most moderate Democrats, Sens. Joe Manchin of West Virginia and Kyrsten Sinema of Arizona, have already suggested they would not support a $3.5 trillion package.

Republicans are certain to use campaign ads accusing Democrats who back that huge measure of voting for proposals that will fuel inflation, raise taxes and cost jobs.