FONTANA, Calif. - A former substitute teacher who was living in his car was gifted with a $27,000 check by a former student.

Villarruel has served as a substitute teacher for decades.

"I feel very lucky and very honored that I have taught in different institutions of different levels," he said.

In early 2020, Villarruel said he resigned after schools shifted to distance learning.

"I decided the school situation has changed completely and I believed that a job of a substitute was over. In May, I submitted my resignation. I managed to do all of the paperwork, all of the arrangements to get my pension. I got my check, but that check didn't last long because I had debts already," he said.

Villarruel has been living out of his car ever since.

"My body has been adapted to all of the bumps and things from the seat. It serves me as transportation, serves as a dining room, and serves as a bedroom," he said.

• Good Samaritan raises more than $84,000 to help 94-year-old street vendor down on his luck
• Man who spent half his adult life in prison graduates with honors from Cal State Long Beach
• WATCH: Heartwarming moment UCLA Law student finds out he passed the California bar
• California girl raises $32,000 for homeless man who found, returned her grandmother’s wallet

His former student, Steven Nava, came across Villarruel one week ago in his car and recognized him.

"I usually see him almost every single day and it got me thinking, 'I've got to talk to him and know his situation.' I was just devastated and gutted for the reality of the pandemic and how it has left teachers without a job and this is one of the results and it's sad to see one of your own teachers go through that so it only makes you want to help out more," he said.

Nava said he remembers Villarruel helping him during his school years.

Nava initially gave Villarruel $300, and then decided to start a GoFundMe page to help Villarruel get back on his feet. He shared it all over social media, including TikTok. Villarruel's story went viral on TikTok with over 1.7 million views. 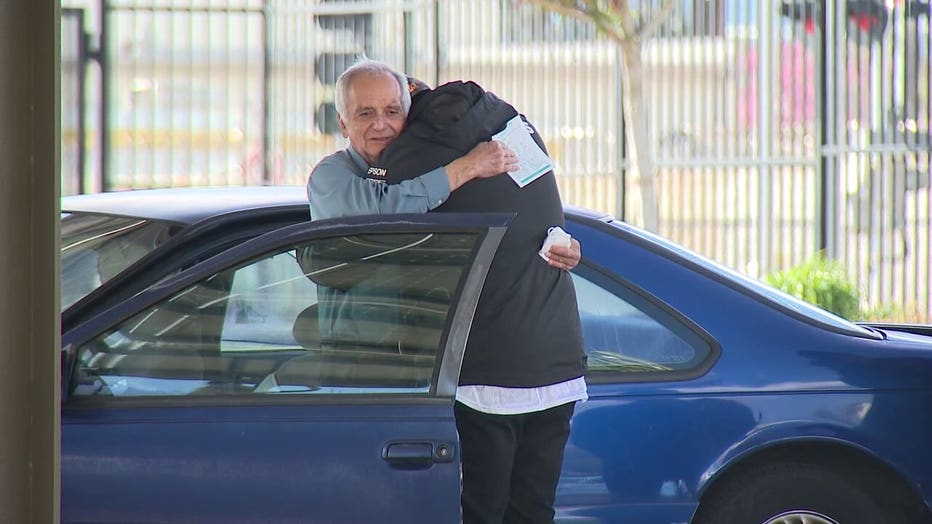 "It's just the power of social media is so big now and sometimes we need to use it for good, and not for bad," he said.

The word spread to the Mayor of Fontana, Acquanetta Warren. Warren, former students of Villarruel and others gathered at the Fontana Community Senior Center for a celebration on Thursday. One of the students who attended was Melissa Lopez.

"Everybody always recognized him [Mr. V] because when he would go into the classroom, he always has such good energy and he would always be so sweet," said Lopez.

Villarruel was presented with a $27,000 check, along with other gifts at the celebration Thursday.

"My initial thought was, 'Am I dreaming?' I still can't get over this experience," he said.

Villarruel said he plans to help others.