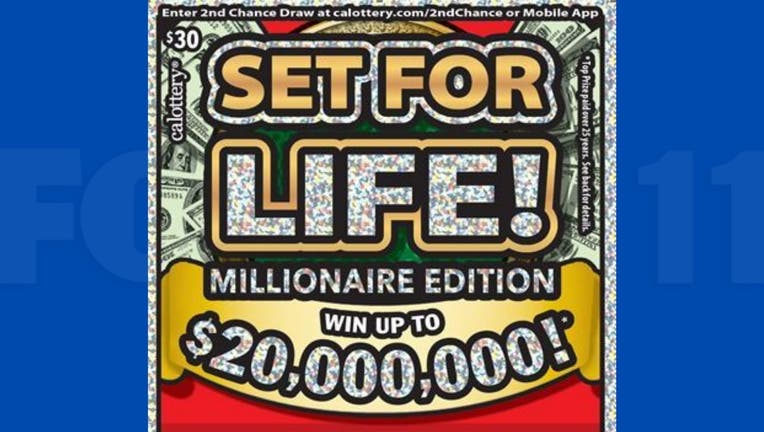 SACRAMENTO, Calif. - The California Lottery announced a new scratch-off game Monday, and the jackpot is the largest ever for a scratch-off ticket.

The top prize "Set for Life Millionaire Edition" is $20 million, though the whole prize isn't offered immediately, the prize comes in $800,000 installments over 25 years. Prior to Monday, the largest jackpot for a scratch-off ticket in California was $10 million.

What potential winners will get will of course be less than the $20 million grand prize. According to the California Lottery, 24% of winnings are withheld for federal taxes for U.S. citizens. With that taken into account, each yearly installment would total about $608,000. Over 25 years, that would total $15.2 million. The yearly payment would be roughly 10 times the average American's annual income, according to the U.S. Department of Housing and Urban Development.

"Our team is always looking closely at what’s popular among players so we can offer new and exciting ways for Californians to have a little fun and also support our mission, which is to raise extra money for public schools," California Lottery Director Alva Johnson said in a press release Monday.

The new game tickets are already up for sale across the state of California. More information can be found on the California Lottery website.