LOS ANGELES - A string of too-early-to-call California U.S. House races remains in play and might end up determining whether Republicans seize control or Democrats hang on to power.

With millions of votes still uncounted Wednesday across the nation’s most populous state, uncertainty remained for about a dozen of the state’s 52 House contests. The most competitive of those races were in the Los Angeles region and the Central Valley farm belt. 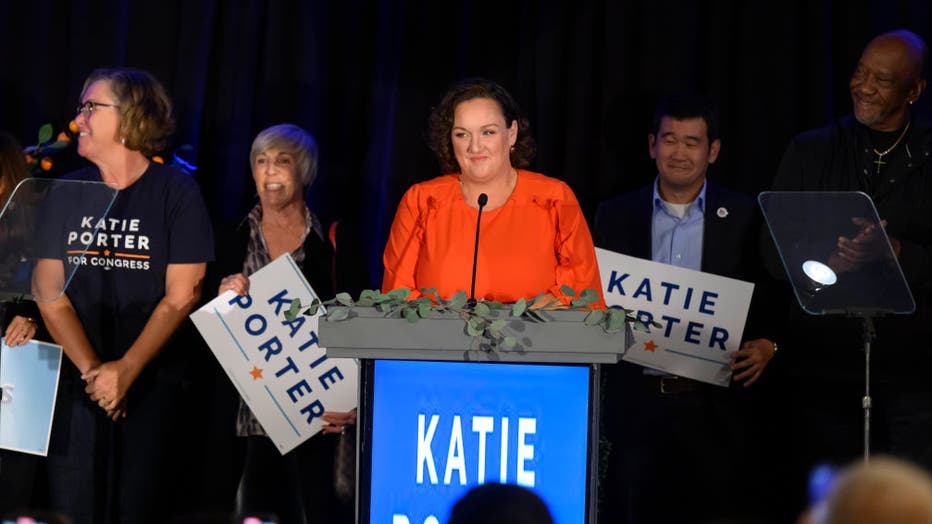 In Southern California, Democratic Reps. Katie Porter and Mike Levin were locked in close races, despite President Joe Biden’s late-hour campaign swing on their behalf. East of Los Angeles, Republican Rep. Ken Calvert was trailing Democrat Will Rollins by 12 points, but less than one-third of the anticipated votes had been tallied.

In the Central Valley, GOP Rep. David Valadao, who voted to impeach then-President Donald Trump, had 54% of the votes counted so far in his race against Democrat Rudy Salas, but most ballots had yet to be tabulated. Four years ago, Valadao lost a reelection bid after seeing a sizable lead on election Day evaporate as late-arriving mail-in ballots were counted. He won back the seat in 2020.

Should Democrats defeat Calvert and prevail in other contests where they were leading or only slightly behind, the year would have echoes of 2018, when the party seized seven Republican-held California seats on the way to retaking the House.

Election 2022: Ken Calvert and Will Rollins race for congress

Ken Calvert is the Inland Empire’s longest serving congressman, first elected to the office in the 90’s. But he could be facing a tough battle for reelection which could mean big shakeups in government.

But if Calvert hangs on and Republicans oust Porter and Levin and win an open seat in Central California, the scenario would look similar to 2020, when GOP House candidates flipped four seats in a state where registered Democrats outnumber Republicans by nearly 2-to-1.

With votes still being counted in key races "we don’t know whether California is a political bellwether or an island," said Thad Kousser, a political science professor at the University of California, San Diego.

If Democrats can hold the Porter and Levin seats and oust Calvert "this red ripple that went across the country becomes a blue counter-ripple," he added.

Democrats also appeared in position to retain their grip on all statewide offices. A Republican hasn’t won one of those races in California since 2006 when Arnold Schwarzenegger was re-elected governor.

The potential for slight shifts mirrored the national political landscape, in which predictions for a Republican "wave" sweeping Congress into solid GOP control failed to materialize. Republicans were closing in on a slim House majority while Senate control will be decided by close races in Arizona, Nevada and Georgia.

Voters continue to wait for the results of key races nationwide..

A loss by Porter would be stunning, after she spent more than $24 million to win a third term. She is a star of the party’s progressive wing, a prolific fundraiser with a national following and is frequently mentioned as a future U.S. Senate candidate.

With about half the vote counted, she was virtually tied with Republican Scott Baugh, who had relentlessly criticized her over soaring gas and grocery prices in a closely divided coastal district with a conservative streak. Porter focused strongly on protecting reproductive rights, after the Supreme Court overturned the Roe v. Wade decision.

Calvert — the longest serving Republican in the California congressional delegation — was first elected in 1992.

His support from Trump posed a challenge in a new, reshaped district about equally split between Democrats and Republicans, which included many transplanted Los Angeles residents and liberal Palm Springs, which has a large concentration of LGBTQ voters.

In a district anchored in San Diego County, Levin was in a tight contest with Republican Brian Maryott, who also targeted pocketbook issues that were the top concern for voters nationally. Biden campaigned for him just days before Election Day.

California Republicans believed as many as five House districts in the state could swing their way — enough to very likely give the GOP the House gavel in a midterm-election year when voters typically punish the party that holds the White House. Republican Rep. Kevin McCarthy of Bakersfield would be in line to replace Speaker Nancy Pelosi of San Francisco.

Democrats hoped to claw back the four seats they surrendered in 2020 and pad their dominance in the state congressional delegation. Republicans hold only 11 of the state’s 53 seats, which drops to 52 seats next year because California’s once-soaring population growth has stalled.

Ballots are still being counted from Tuesday's Election Day. Paul Mitchell, a political data expert, joined FOX 11 Special Report to talk about the top races and their outcomes.

One of the closest contests was for an open seat, the Central Valley’s 13th District, which has a prominent Democratic tilt and a large Latino population. But the most likely voters tend to be white, older, more affluent homeowners, while working-class voters, including many Latinos, are less consistent getting to the polls. Republican John Duarte and Democrat Adam Gray were nearly tied.