LOS ANGELES - Lindsey Horvath has been elected to fill the open seat on the Los Angeles County Board of Supervisors.

State Sen. Bob Hertzberg and West Hollywood City Councilwoman Lindsey Horvath were locked in a near tie. As votes were tallied from Tuesday's election, Hertzberg and Horvath almost evenly split the vote -- 51% to 49% -- with Hertzberg holding a slim 4,100-vote lead. But those numbers soon changed. 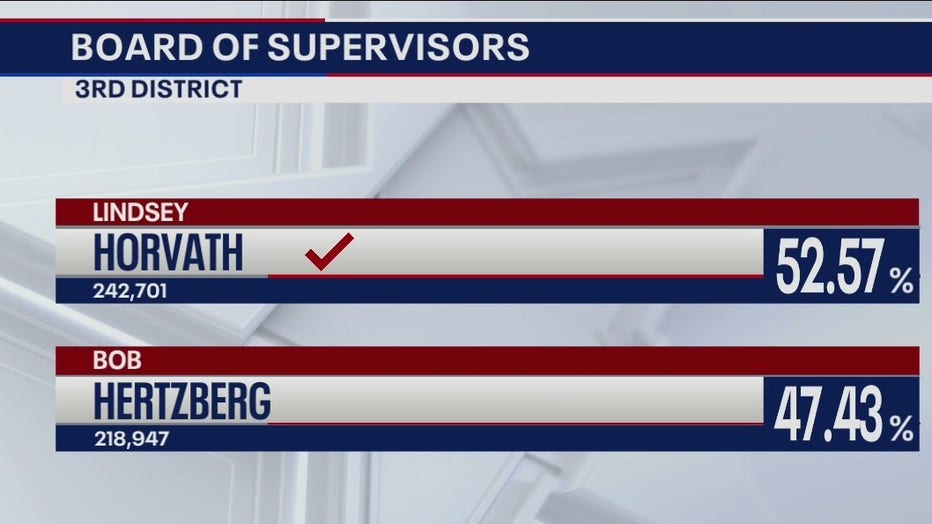 Horvath will replace Supervisor Sheila Kuehl, who opted against a reelection bid for her District 3 seat.

She will be the youngest member on the board.

Horvath listed homelessness as a top priority of her campaign.

"We have to see those services being delivered on the streets. We have to see people getting off the street and into the housing and services the county is supposed to be providing. We will be reflecting the work that is done transparently, whether it is as I hope that we will do, through weekly notice meeting, reporting out on a weekly basis," Horvath said on FOX 11's Special Report.

Horvath said she helped spearhead an "intersectional approach" to homelessness in West Hollywood, incorporating housing, services and community safety, while pushing for the production of transitional, supportive and long-term affordable housing.

Horvath was elected to the West Hollywood City Council in March of 2015, she also served as a councilmember for two years from 2009-2011. Horvath was sworn in as Mayor in April of 2015 and again in May of 2020.