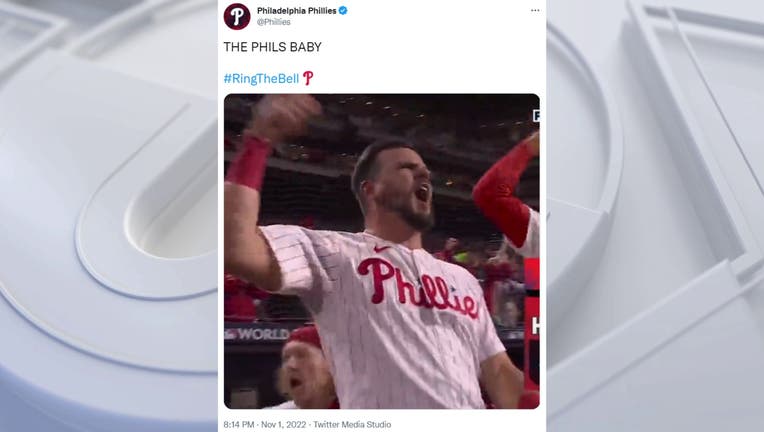 The Philadelphia Phillies take a 2-1 series lead after beating the Houston Astros 7-0 in Game 3 of the World Series.

Rhys Hoskins had just lined a slider into the left-field seats for the Philadelphia Phillies’ fifth home run in five innings — five! — to punctuate one of the most calamitous starts in World Series history.

Only after hesitating did the 29-year-old Houston Astros right-hander turn for a peak. He really didn’t have to.

Five years after winning Game 3 of the Series against the Los Angeles Dodgers, McCullers had a Charlie Brown-type outing, the first pitcher to allow five homers in any postseason game.

Was he tipping his pitches?

Speculation started soon after Harper hit a go-ahead, two-run drive in the first, sending a slider 402 feet into the right-center field seats. McCullers did a 360 and hopped off the mound, not even waiting for the ball to land.

Harper said something to Nick Castellanos and pointed a finger at his teammate’s chest while crossing the plate, then yelled "Bohmer!" before a quick chat with Bohm, who was on deck.

Bohm led off the second with the 1,000th homer in Series history, driving a sinker 373 feet into the left-field stands.

Thirteen pitches later, Marsh sent a hanging slider soaring 358 feet and just over the right-center wall, where the ball dropped out of the glove of 10-year-old Ty Kuhner of Wilmington, Delaware, and bounced back onto the field. The home run call was upheld after a video review.

Schwarber led off the fifth with the most majestic of the homers, launching a hanging changeup 443 feet off the shrubbery behind the center-field fence. McCullers crouched, then turned and watched the ball land, almost in disbelief.

Pitching coach Bill Murphy visited the mound. Five pitches later, Hoskins reached out for a slider and drove it 374 feet into the front of the left-field stands. McCullers was pulled with a seven-run deficit.

McCullers missed all of 2019 following Tommy John surgery and didn’t make his season debut this year until mid-August because of a strained right flexor tendon.

He had never before allowed more than three homers in a game. Now he had broken the record of homers allowed in a Series game: The Chicago Cubs’ Charlie Root gave up two each to the Yankees’ Babe Ruth and Lou Gehrig in 1932′s Game 3; Cincinnati’s Gene Thompson allowed four against the Yankees (including one by Joe DiMaggio) in 1939′s Game 3; and St. Louis’ Dick Hughes yielded four against Boston in 1967′s Game 6.