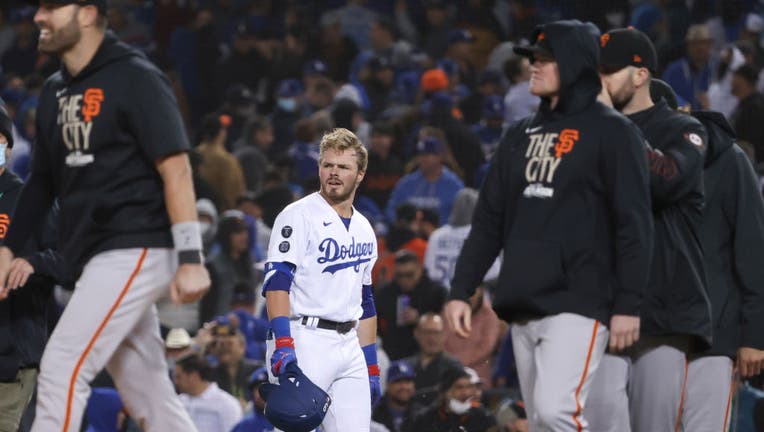 Los Angeles, CA - October 11: Los Angeles Dodgers' Gavin Lux reacts after a fly out at the outfield wall during the ninth inning in game three of the 2021 National League Division Series against the San Francisco Giants at Dodger Stadium on Monday, O

LOS ANGELES - Frigid wind gusts roared in from center field well before sundown and continued through the late innings Monday night. They buffeted the foul poles and turned normally pleasant Chavez Ravine into a whirling cauldron that felt and played more like the San Francisco waterfront, or even old Candlestick Park.

"It’s just part of the game, Mother Nature," said Los Angeles slugger Albert Pujols, who had two hits. "And you have to respect that."

The Dodgers were at home, but they were out of their element — and they played accordingly in a loss that sent the defending World Series champions to the brink of elimination.

The Dodgers managed just five singles in a 1-0 loss to the Giants on Monday night in Game 3 of the NL Division Series. The formidable lineup that led the NL with 830 runs and hit 237 homers in the regular season has been shut out twice in three games against San Francisco — and in the crucible of a best-of-five series, that’s an enormous problem.

The wind was like nothing this stadium had experienced in recent memory, but the Dodgers felt they should have been able to overcome any elements.

"Hey, it happens," Pujols said. "That’s something that you cannot control. It’s part of the game. You can’t think it was cold. ... You can’t blame it on the wind, because we lost the game tonight.

But for the second time in the series, the Dodgers were incapable of getting the timely, dramatic hits that have characterized so much of their postseason success while winning three NL pennants and one ring over the previous four seasons. Even going against unassuming former Dodgers starter Alex Wood, whose fastest pitch didn’t top 90 mph, was too much for this punchless powerhouse in blue.

Still, the Dodgers had a few moments where they thought their postseason serendipity had returned — only for it to be blown down again.

Gavin Lux thought he’d broken through with two outs in the ninth, lifting his arm in celebration after hitting a 106.9-mph drive to left-center. Statcast estimated the hit would be a homer 69% of the time, with an .890 expected batting average. Instead, it barely reached the warning track and fell into Steven Duggar’s glove.

Chris Taylor also hit a fly to the warning track in right-center with an XBA of .920 in the sixth, yet Duggar tracked down that one as well.

"I think any other night, the CT ball, the Gavin Lux ball would have been home runs," Roberts said. "Those two balls right there, it would have been a different outcome. But those are the elements that both teams had to play with, and that’s baseball."

Los Angeles hit 30 playoff homers and scored 101 runs on its way to the World Series title last season, but a Game 3 lineup with six returning position players from 2020 was no better than the group that got blanked in Game 1.

LA’s power outage wasn’t completely caused by the winds that bent the palm trees and sent the temperature plummeting, but it has put the Dodgers in a tight spot heading into Game 4 on Tuesday night.

The Giants had a great deal to do with Los Angeles’ offensive ineptitude, particularly in the seventh inning. Two Dodgers were on base against former LA reliever Jake McGee when Mookie Betts stung a 100.4-mph line drive toward left — but shortstop Brandon Crawford, a UCLA product, snared it with a perfectly timed leap.

"Really good at-bat," Roberts said with palpable frustration. "Squared it up. Brandon was in the right spot and made an athletic play that we have seen time and time again."

Betts also was robbed of a hit by Crawford earlier when the shortstop snared a sharply hit grounder for the final out of the fifth.

Los Angeles went 0 for 4 with runners in scoring position, failing to come through in the few times when it mattered. Regular postseason star Max Muncy is injured and not playing, but plenty of past October heroes — Justin Turner, World Series MVP Corey Seager, Taylor and Betts — have all run low on playoff magic.

Although one particularly unruly gust shoved Max Scherzer partly off the mound in the first inning, the Dodgers still got everything they expected and demanded from the 37-year-old right-hander, who threw seven innings of three-hit ball with 10 strikeouts.

Unless Los Angeles rallies for two wins over San Francisco, Scherzer will head to unrestricted free agency this winter — alongside Clayton Kershaw, Taylor and closer Kenley Jansen, among others — with disappointment all around after the Dodgers’ gamble to land the ace and Trea Turner failed to generate postseason success.