Dodgers longtime ace Clayton Kershaw shared a touching moment with a 10-year-old boy after taking the mound in the 2022 MLB All-Star Game.

Fans rooting for a tie score after nine innings so they could see a first-time home run derby decide it instead of extra innings didn’t get their wish.

Instead, the back-to-back homers in the fourth inning were the difference as the AL boosted its overall edge to 47-43-2.

Nine-time All-Star Clayton Kershaw got the first start of his career for the NL in his home ballpark, with the Dodgers hosting for the first time since 1980. Los Angeles Angels two-way star Shohei Ohtani pounded out the game’s first hit on Kershaw’s first pitch. 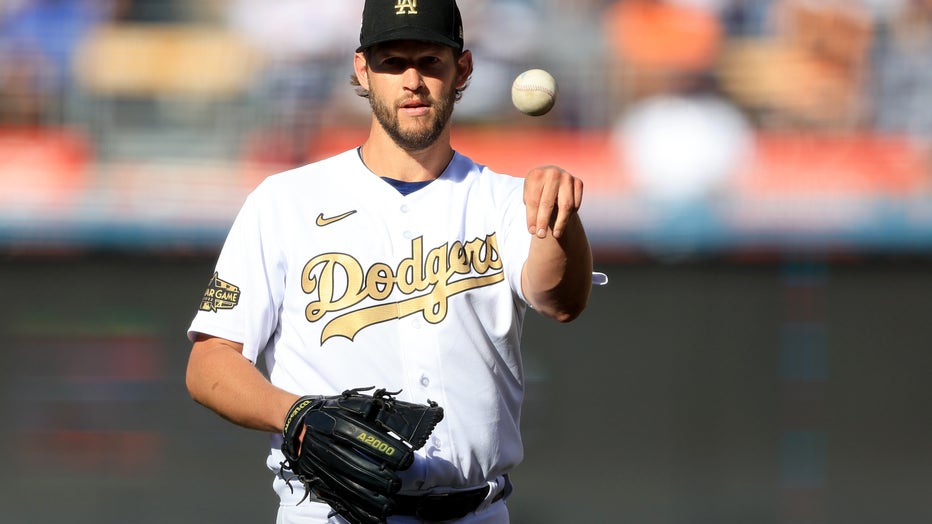 LOS ANGELES, CALIFORNIA - JULY 19: Clayton Kershaw #22 of the Los Angeles Dodgers tosses the ball back in the first inning during the 92nd MLB All-Star Game presented by Mastercard at Dodger Stadium on July 19, 2022 in Los Angeles, California. (Photo

Framber Valdez of Houston got the win, tossing a scoreless third inning.

AL starter Shane McClanahan of Tampa Bay gave up two runs and four hits. The first-time All-Star, who owns a MLB-leading 1.71 ERA, had allowed four hits or fewer in his last seven starts.

McClanahan combined with 10 other pitchers on the five-hitter. Emmanuel Clase struck out the side in the ninth to earn the save. Austin Riley’s single in the eighth was the NL’s only hit after the first inning.

Facing 11-game winner Tony Gonsolin of the Dodgers, Stanton’s impressive 457-foot, two-run shot landed in the left-field pavilion, not far from where the L.A. native watched games as a youngster.

It ended his career 0 for 7 skid in the game and at 111.2 mph, it was the hardest-hit homer in an All-Star Game tracked by Statcast. Also scoring was José Ramírez, tying the game 2-all.

Four pitches later, Buxton went deep to give the AL a 3-2 lead against a clearly frustrated Gonsolin, who took the loss.

Ohtani led off for the AL as the designated hitter. Interviewed moments before the start, the Japanese superstar admitted he was going to swing. He cracked a 91-mph fastball into center field on the first pitch.

"I was definitely swinging a hundred percent," Ohtani said through a translator. "Kershaw has really good command."

His hit snapped an 0 for 8 streak as a hitter against Kershaw. Last year, Ohtani was the starting pitcher and led off as the DH in the AL’s 5-2 win at Denver. He didn’t pitch this year so he can start Friday in the Angels’ first game after the break at Atlanta.

"I mean, you can’t throw the first pitch of an All-Star Game as a breaking ball," Kershaw said. "You kind of had to give him a heater there, I think just for everything. Had to do it."

But the three-time NL Cy Young Award winner had the last word. Kershaw fired a pickoff throw to first that caught Ohtani off the bag.

"Honestly, I didn’t know quite know what to throw yet. Sometimes I throw over there for a second to be convicted with the pitch," Kershaw said. "I wasn’t trying to pick him off. I was trying to delay the game for a bit, but it worked out."

Then Yankees slugger Aaron Judge went down swinging. After Rafael Devers walked, Vladimir Guerrero Jr. grounded into a fielder’s choice, and Kershaw walked off to applause from the appreciative crowd.

"I tried to take a minute at the beginning to take it all in and look around, which I usually never do," Kershaw said. "It kind of calmed everything down for me and then I had a lot of fun."

The NL wasted no time in taking its first 2-0 lead in 10 years. Styling in yellow spikes and alternate yellow and red sleeves, Ronald Acuña Jr. led off the bottom of the first with a ground-rule double to left and scored on Mookie Betts’ single. Paul Goldschmidt hit a solo homer with two outs.

In between runs, AL second baseman Andrés Giménez made a defensive stop on Manny Machado and followed with a dazzling behind-the-back toss to shortstop Tim Anderson, who threw to first to complete the double play.

A sellout crowd of 52,518 filled Dodger Stadium two years after the third-oldest ballpark in the majors was supposed to host before the game was canceled because of the COVID-19 pandemic.

HERE’S TO YOU, MS. ROBINSON

Dodgers outfielder Mookie Betts, with all of the other All-Stars bunched behind him, led the crowd in sending out 100th birthday wishes to Rachel Robinson. On his 1-2-3 count, the crowd and players shouted "Happy birthday, Rachel!" The widow of Jackie Robinson didn’t travel from her home in New York. She visited Dodger Stadium in April on Jackie Robinson Day to mark the 75th anniversary of her husband breaking baseball’s color barrier with the Brooklyn Dodgers in 1947. Jackie Robinson’s achievement was honored with on-field comments by Oscar-winning actor Denzel Washington and a presentation on the video boards.

Backed by a mariachi band, Dodgers great Fernando Valenzuela tossed out the ceremonial first pitch. Fittingly, first-time All-Star Alejandro Kirk of Toronto served as catcher. Kirk and Valenzuela were both born in Mexico. Fernandomania gripped the Dodgers in 1981, when the left-hander won Rookie of the Year and the Cy Young Award in helping LA win the World Series.

The reviews were mostly negative for the second straight year on the All-Star uniforms. The AL wore dark gray uniforms that blended into plate umpire’s black shirt and dark gray pants. The NL wore all-white uniforms. Both had gold lettering. Fans were critical on social media, with "atrocious" a frequent critique. Last year, MLB went away from wearing traditional jerseys, which met with heavy online criticism.

Alek Manoah, Toronto’s expressive right-hander, wore a microphone and earpiece while pitching the second inning, engaging in an entertaining conversation with Fox analyst and Hall of Famer John Smoltz. "How hard am I throwing?" Manoah asked early. He also sought scouting reports on Joc Pederson and Acuña Jr. Manoah did fine, striking out three and also plunking Jeff McNeil with a pitch. A lot of players were mic’ed up. Fans heard Yankees teammates Aaron Judge and Stanton talking back and forth while playing the outfield, and Yankees batterymates Nestor Cortes and Jose Trevino talking while working together.

THE SHIFT IS STILL ON

Dodgers first baseman Freddie Freeman batted in the third to the now familiar chants of "Freddie! Freddie!" Even in the exhibition game, an extreme shift was on and he was thrown out from right field. Home Run Derby champion Juan Soto got thrown out by the third baseman playing much closer to second base to end the fifth. Next season, the shift is going away.

Hall of Fame announcer Vin Scully, the voice of the Dodgers for 67 years before retiring in 2016, watched the game from his Los Angeles home. The Bronx-born 94-year-old began calling games when the franchise was located in Brooklyn and followed the team west ahead of the 1958 season.

The regular season resumes with six games on Thursday, including Aaron Judge, Stanton and the Yankees playing a doubleheader at Houston. The Yankees own the best record in the majors at 64-28. Jose Altuve, Yordan Álvarez and the Astros have the second-best mark in the AL at 59-32. Also, it will be Freeman, Betts, Trea Turner and the Dodgers, topping the NL at 60-30, hosting the Giants.