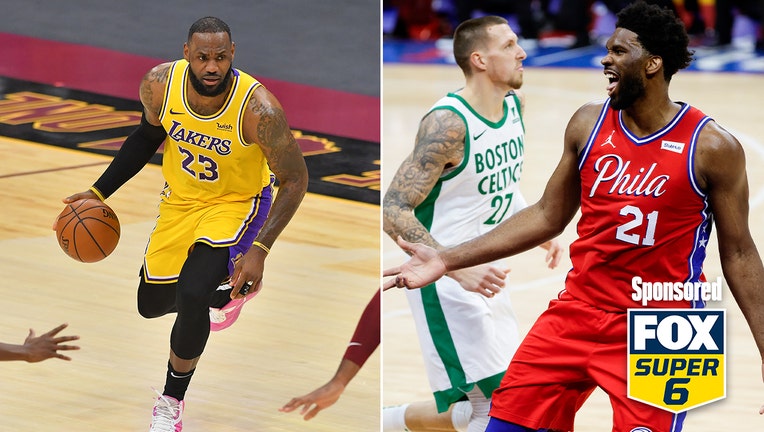 LEFT: LeBron James #23 of the Los Angeles Lakers brings the ball up court during the second half against the Cleveland Cavaliers at Rocket Mortgage Fieldhouse on January 25, 2021 in Cleveland, Ohio. The Lakers defeated the Cavaliers 115-108. (Photo b

Certain teams in the history of the NBA are just linked together forever, either through geography or rivalry.

Because of their battles in the 1980s which continued through another NBA Finals appearance in 2001, the Philadelphia 76ers and the Los Angeles Lakers are two such teams.

Two of the Lakers all-time icons - Wilt Chamberlain and Kobe Bryant - were products of the Philadelphia region. The matchups between Julius Erving and Magic Johnson were a staple of late May and early June. It became blue collar Mid-Atlantic city versus California Cool Showtime.

On Wednesday night, the two sides will meet again in a potential preview of what could lie down the road in the NBA Finals. And the 76ers/Lakers matchup this time could be one of those that could win you $25,000 in FOX Bet’s Super 6 contest.

Just download the Super 6 app on your mobile device, pick the winners with the correct margin of victory and you could win the grand prize.

That’s all you need to do. Here are the games for Wednesday night’s FOX Super 6 NBA contest. (Games are subject to change due to COVID-19 protocols.)

Cleveland will try to bounce back from a disappointing 115-108 loss to the Lakers at home on Monday. Andre Johnson had 25 points and 17 rebounds and has played extremely well for the Cavs, who have improved dramatically from last year. Delon Wright had 28 points and nine assists for the Pistons in a 119-104 win over Philadelphia on Monday night. Still, Detroit possesses the worst record in the NBA and has shown few glimpses of real improvement as the year has gone along.

For Denver, this is the fourth part of a five game road trip that has seen the Nuggets go 3-0 to start with a 117-113 win over Dallas Monday night. Michael Porter Jr. scored 30 points- helped out by six 3-pointers. Miami has lost three in a row and six out of eight, including a 98-85 loss to Brooklyn on Monday night that squandered Bam Adebayo’s 26 points and 10 rebounds.

Biggest question coming into this game could be the status of Sixers center Joel Embiid, who missed Monday night’s 119-104 loss at Detroit with back soreness. Embiid is playing at an MVP level, averaging 27.7 points and 11.3 rebounds a game. Philadelphia is 0-4 without Embiid in the lineup, 12-2 with him in the lineup. For the Lakers, this is the middle game of a seven game road trip to the East that saw them open up with wins at Milwaukee, Chicago and Cleveland. LeBron James and company have started the season with ten straight road wins to combat whatever post-title hangover they could have. James had 46 on Monday night against the Cavs in his annual return to his hometown.

The Celtics will play their third game in four nights and fourth game out of five on the road. Jaylen Brown scored 26 points Monday night in a 119-103 win over Chicago. Jayson Tatum returned after missing five games due to COVID-10, scoring 24 points along the way. The Spurs had their Monday night game against the Pelicans cancelled because they didn’t have the required eight players due to COVID-19 contact tracing. DeMar DeRozan is leading the way for San Antonio, scoring 20.1 points per game.

Utah will play the second of back to back nights- they had a Tuesday night contest at home against the Knicks- and look to keep their recent stretch of success going. The Jazz carried an eight game winning streak into Tuesday night’s game, averaging 113.2 points per game thanks to Donovan Mitchell’s team leading 24.3 point per game average. The Mavericks are struggling to find a rhythm so far, but Luca Doncic has been stellar with a 27.3 point per game average with 9.8 rebounds and 9.9 assists.

The second time in three nights these teams will meet in the City By The Bay. On Monday night, Stephen Curry scored 36 points thanks to seven 3-pointers while Andrew Wiggins added 23 during Golden State’s 130-108 victory. Marcus Beasley lead the Timberwolves with 30 poiunts on 10 of 18 shooting while Ricky Rubio added 11 assists.