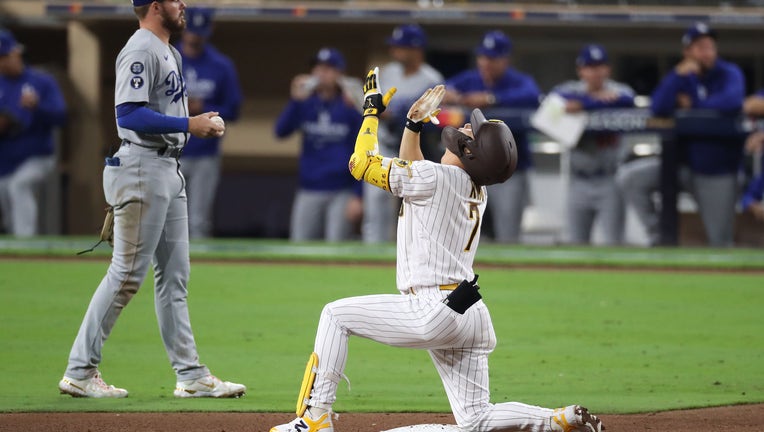 SAN DIEGO, CALIFORNIA - OCTOBER 15: Ha-Seong Kim #7 of the San Diego Padres celebrates after hitting a RBI double during the seventh inning against the Los Angeles Dodgers in game four of the National League Division Series at PETCO Park on October 1

SAN DIEGO (KTTV) - Rain delay, drone delay, goose delay and countless runners left on base – Game 4 of the National League Division Series had everything except a Dodger victory.

The Los Angeles Dodgers’ historic season comes to a sudden and rather extremely disappointing end. The Boys in Blue fell to NL West rivals San Diego Padres 5-3 to lose the best-of-five series 3-1.

The Dodgers drew first blood in the top of the 3rd after a two-run RBI double from Freddie Freeman. Los Angeles capitalized on a pitching gem from Tyler Anderson as the veteran lefty tossed five shutout innings before Dave Roberts turned to the bullpen for the rest of Game 4.

The Dodgers added an insurance run at the top of the seventh – but the 3-0 lead did not feel like Los Angeles put a dagger in San Diego as the Boys in Blue left nine runners on base. The Dodgers went on to suffer a horrific collapse in the bottom of the seventh – allowing five San Diego runs in the hands of the Dodgers bullpen.

The Boys in Blue failed to get a win Saturday after both teams were dealt with a rain delay – a rarity in Southern California. As if the game couldn't get any weirder – Game 4 also featured a drone delay, happening just days after Dodger Stadium went through a "goose delay."

The Dodgers finished the 2022 regular season with a franchise-best 111-51 record. The team had also captured the division title weeks before the regular season even ended.

With the offseason acquisition of star first baseman Freddie Freeman via free agency last winter and many of the stars from the 2020 championship team intact, the Dodgers were expected by many to make a World Series title run. The team's loaded roster even prompted manager Dave Roberts to guarantee a World Series title heading into the start of the 2022 campaign.