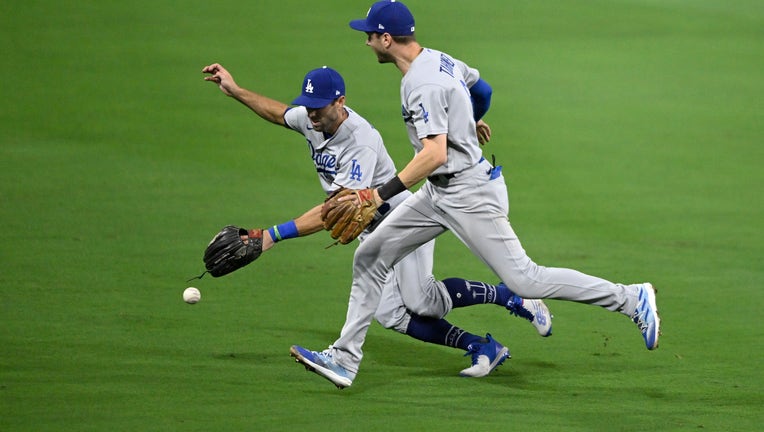 Trea Turner of the Los Angeles Dodgers drops a ball hit by Jake Cronenworth #9 of the San Diego Padres during the third inning in game three of the NLDS. (Photo by Denis Poroy/Getty Images) (Getty Images)

SAN DIEGO (KTTV) - The Los Angeles Dodgers are now on the brink of elimination. This comes as the Boys in Blue lost to the San Diego Padres 2-1 in Game 3 of the NLDS.

The Boys in Blue struggled to figure out Padres' Blake Snell as the lefty threw 5 ⅓ innings and allowed only one run.

The Padres drew first blood in the first inning after an RBI single from Jake Cronenworth to put San Diego on board 1-0. His teammate Trent Grisham doubled the Padres' lead after blasting a solo homer off Dodgers' Andrew Heaney in the bottom of the fourth.

The Dodgers finally scored in the top of the fifth inning after an RBI sacrifice fly from Mookie Betts to cut the Padres lead to one run. However, the Dodger bats ultimately failed to produce another run.

With the loss, the Dodgers trail the best-of-5 series 2-1 to the Padres. The Boys in Blue had a promising start in the 2022 postseason, taking Game 1 at home, before dropping Games 2 and 3.

A Dodger loss either Saturday (Game 4) or Sunday (Game 5, if they make it that far) would mark a sudden and extremely disappointing finish to LA's historic 2022 season. The Dodgers finished the 2022 regular season with a franchise-best 111-51 record. The team had also captured the division title weeks before the regular season even ended.