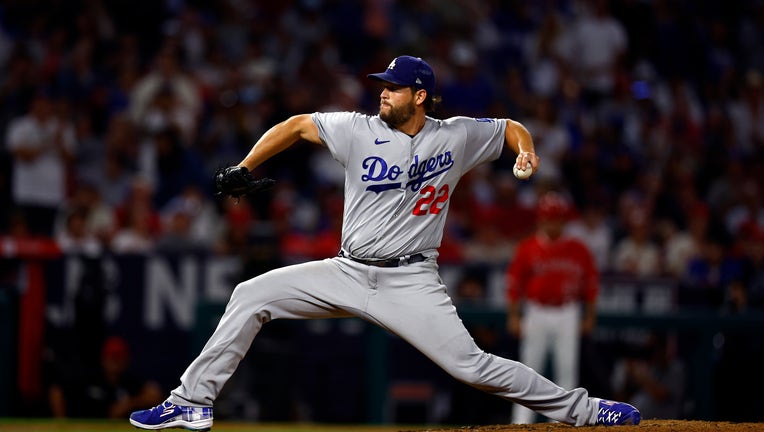 ANAHEIM, CALIFORNIA - JULY 15: Clayton Kershaw #22 of the Los Angeles Dodgers throws against the Los Angeles Angels in the seventh inning at Angel Stadium of Anaheim on July 15, 2022 in Anaheim, California. (Photo by Ronald Martinez/Getty Images)

Kershaw needed just 71 pitches to retire the first 21 consecutive batters at Angel Stadium on Friday night, but Rengifo ended Kershaw’s quest for his second no-hitter and first perfect game with a clean double down the left field line.

The sellout crowd in Anaheim was packed with a large portion of Dodgers fans, and it rose for a lengthy standing ovation for Kershaw, who threw his only no-hitter back in 2014.

Sandy Koufax threw the only perfect game in Dodgers history on Sept. 9, 1965. Only 23 perfect games have been thrown in major league history.

The 34-year-old Kershaw was selected for his ninth All-Star team earlier this month, and he is a candidate to start for the NL at Dodger Stadium on Tuesday night. The three-time Cy Young Award winner got a head start on what’s sure to be a celebration of his career by dazzling the struggling Angels, who have been offensively inept while losing 10 of their previous 12.

Kershaw had six strikeouts in the first seven innings while keeping the Angels thoroughly off balance. He fanned AL MVP Shohei Ohtani for the second out of the seventh inning with a jaw-dropping curveball.

Justin Turner made a diving stop of Michael Stefanic’s grounder to third in the fourth inning, getting up on one knee for a spectacular throw to first. Hanser Alberto then made a lunging stop of Jared Walsh’s line drive to end the fifth while playing deep in the hole in right field. Trea Turner completed the trio with an outstanding stop on another hard-hit grounder in the seventh by Stefanic, the Angels rookie.

Kershaw began the night 6-2 with a 2.40 ERA in 11 appearances for the Dodgers. In his most recent start, he earned his 191st career victory and passed Dazzy Vance for third place on the Dodgers’ career list.

Kershaw already flirted with history in his first start of the season, throwing seven perfect innings with 13 strikeouts at Minnesota on April 13. Los Angeles manager Dave Roberts pulled Kershaw from that start with the lefty’s reluctant approval, and reliever Alex Vesia gave up the Twins’ only hit in the eighth.

Kershaw is the only pitcher in the post-1961 expansion era to be perfect through seven innings more than once in a season, according to the Elias Sports Bureau.

Kershaw threw his only no-hitter on June 18, 2014, against the Colorado Rockies. He struck out a career-high 15 and allowed his only baserunner on Hanley Ramirez’s error in the seventh inning.

The Dodgers’ only no-hitter since Kershaw’s gem was thrown by Walker Buehler and three relievers in May 2018. The franchise has 25 no-hitters, but only Koufax’s perfect game nearly 57 years ago.

Kershaw fell six outs short of the fourth no-hitter and the first perfect game of the 2022 season. Angel Stadium has already hosted one this season: Halos rookie Reid Detmers blanked the Tampa Bay Rays on May 10 for the only non-combined no-hitter of the year. The Mets (April 29) and the Astros (June 25) threw combined no-hitters.