The Clippers and the City of Los Angeles celebrated a momentous achievement at the Michelle and Barack Obama Sports Complex.

LOS ANGELES - The Los Angeles Clippers continue to create their own identity in the NBA and in Southern California.

For those who feel the Clippers are trying to be like the legendary Lakers, whom they currently share an arena with, those in Clipper Nation will be quick to tell you that you are mistaken.

Many sports fans are quick to point out that the Clippers have yet to win an NBA championship or even make an appearance in the NBA Finals.

"I grew up with the Clippers being the worst franchise in sports. There was a fan base there but nothing to be excited about," recalled Jamal Cristopher, a Los Angeles native and longtime Clippers fan.

Now, things are changing and the league and the city they call home are taking notice. The team's momentum continues to build, with the Clippers making a positive impact on the court and in the community.

"One of the ways you can really tell the Clippers aren’t the franchise they used to be is that major growth has taken place and there’s a large fan base here in Los Angeles that loves and appreciates the Clippers," Cristopher said.

In 2018, the Clippers Foundation said it would donate $10 million to the LA Parks Foundation to renovate every single one of the city’s 350 indoor and outdoor basketball courts, in an initiative called the Clippers Community Courts project.

The foundation made good on its promise and on Tuesday, it celebrated the opening of the 350th Clippers Community Court at the Michelle and Barack Obama Sports Center in South Los Angeles.

"At the end of the day, we thought it would take 10 years," Clippers Owner and Chairman Steve Ballmer said. "They figured out a way to do it. They got the right contractors [and they] made it happen."

LA Mayor Eric Garcetti was in attendance and said longtime City Councilmember Herb Wesson made sure renovating the city’s parks was included in the city’s budget through the years. Garcetti and Wesson both mentioned how the importance of the recreation center was to the community.

"Los Angeles is a place where we plant our dreams and watch them grow," Garcetti said. "When you think about the young people who will come here and plant their dreams, they may be the next Williams sisters."

Wesson added the young athletes who go to the recreation center could even make their way to the 2028 Summer Olympic Games that will be held in the City of Angels.

"Here in LA, we’re the sports capital of the world, but we also want to be the opportunity capital. So, no kid gets shut out just because of his or her zip code or because of what part of town they live in," Garcetti said.

Cristopher says the renovated courts across the city with the Clippers' logo will have a profound impact on the future.

"You can feel it now. The Clippers' fan base in Los Angeles-- really worldwide -- but especially LA, has never been stronger or bigger. But you’ll really see it a decade or two from now. Kids are going to grow up with Clippers being all they know," he said.

The ceremony also marked the first public appearance as a Clipper for rookie Moussa Diabaté, who was drafted by the Clippers Thursday. It was a full-circle moment for him as he grew up playing basketball on city courts in Paris. 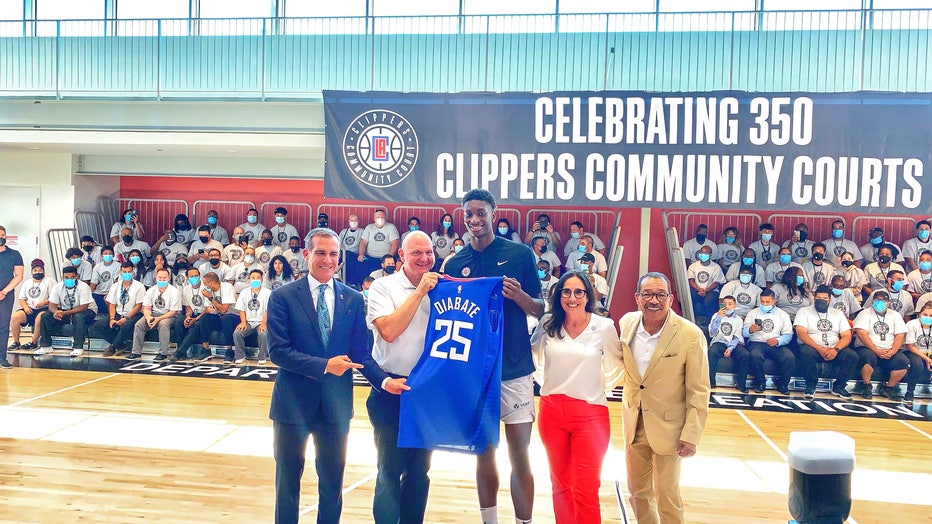 The courts have become a safe place for adults and kids to play basketball and other sports, and the impact goes beyond the world of basketball. The multi-use courts have been used as shelters and food distribution centers throughout the coronavirus pandemic.