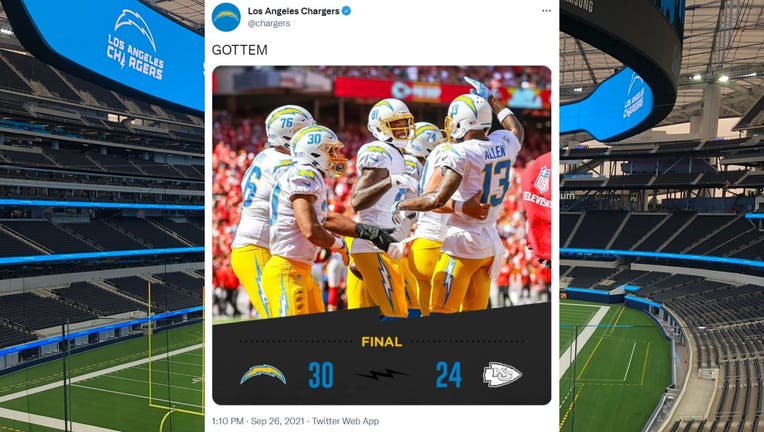 KANSAS CITY, Mo. (AP) - The Chargers capitalized on four Kansas City turnovers, including Patrick Mahomes’ second interception in the closing minutes, and Justin Herbert’s touchdown toss to Mike Williams with 32 seconds to go lifted Los Angeles to a 30-24 victory over the Chiefs on Sunday.

Herbert finished with 281 yards passing and four touchdowns without an interception, outdueling Mahomes in a matchup not only of two of the game’s best young quarterbacks but two teams expected to compete for the AFC West title.

Instead, the Chargers (2-1) won for the third time in four trips to Kansas City to send the two-time defending conference champion Chiefs (1-2) to the division cellar.

The Chiefs trailed 14-0 early but had climbed back into the game in the second half, taking a 24-21 lead midway through the fourth quarter. But the Chargers tied it on Tristan Vizcaino’s short field goal, and after Mahomes was picked by Alohi Gilman with 1:42 to go, Herbert began the march for the go-ahead touchdown.

He converted a third-and-2 near midfield with a pass to Allen, then the Chargers were bailed out on a fourth-down incompletion by DeAndre Baker’s pass interference. Herbert hit Williams for a 16-yard gain before finding his big wide receiver in the end zone for the second time in the game.

The Chiefs got to midfield in the closing seconds, but Mahomes’ throw to the end zone was incomplete.

He finished with 260 yards passing and three touchdowns to go with his two interceptions, while Clyde Edwards-Helaire ran for 100 yards with a touchdown catch but was responsible for one of two Kansas City fumbles.

The Chargers’ defensive game plan seemed simple: They refused to let Mahomes throw deep, forcing him into short check-downs, and made the Chiefs put together long drives while waiting for them to self-destruct.

On the Chiefs’ opening possession, Mahomes bounced a pass off Marcus Kemp that landed in the hands of rookie Asante Samuel Jr. for his second interception in as many weeks. On their next drive, Demarcus Robinson coughed it up at nearly the same spot on the field. And on the Chiefs’ offensive third try, Edwards-Helaire fumbled one week after his fumble in the closing minutes cost Kansas City a shot at a winning field goal in Baltimore.

That was the fifth turnover in six possessions dating to last Sunday night’s loss.

Herbert found Allen for a short TD pass early in the second quarter, then hit Ekeler from 16 yards on their way to a 14-3 halftime lead.

The Chiefs must have pushed reset in the locker room.

They used a 12-play, 75-yard drive to start the second half that ended with a short TD throw to Jody Fortson. A 10-play, 70-yard drive then ended with Edwards-Helaire catching a TD pass.

LA answered with a 75-yard drive, converting on fourth down along the way and ending with a TD pass to Williams. But Mahomes conjured some more magic in marching his team 72 yards and finding Mecole Hardman for another go-ahead touchdown.

The Chargers had a chance to regain the lead from the Kansas City 1, but an illegal shift penalty took away a TD pass. Los Angeles had to kick a tying field goal — the first time in 13 red-zone trips this season the Chiefs had not allowed a touchdown.