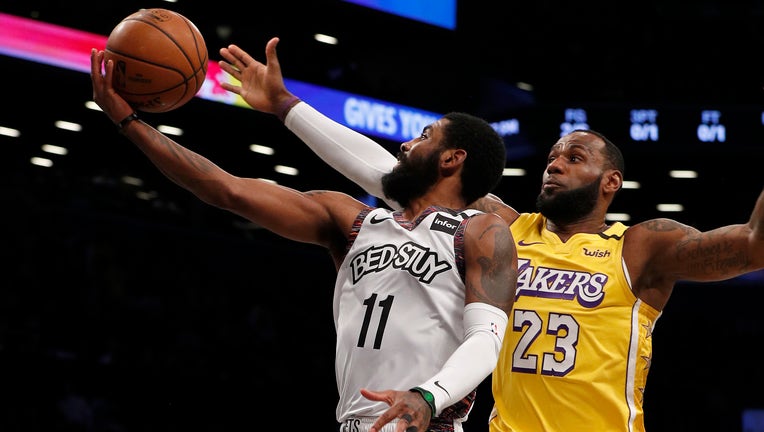 Laker Nation is hoping this offseason could provide any form of optimism for the team's fanbase ahead of the 2022-2023 NBA season.

As for any hopes of turning the team around through the draft – the Purple and Gold were in a tough spot. The New Orleans Pelicans had the Lakers' first-round pick (No. 8 pick) Thursday night as part of the blockbuster trade the two teams agreed to back in 2019 that sent Anthony Davis to LA. In exchange for Davis, the Lakers sent Lonzo Ball, Brandon Ingram, Josh Hart, the 2019 1st-round pick (which the Pelicans used to trade down), the right to swap first-round picks for 2023 and the 2024 first-round pick unprotected with the option to defer to 2025.

However, the Lakers did have one pick during Thursday night's draft – which they used to pick former Michigan State shooting guard Max Christie. The Lakers landed Christie via the Magic in exchange for a future second-round pick and cash.

Could the Lakers land Kyrie?

Earlier in the week, rumors started circulating that Los Angeles could be a landing spot for Brooklyn Nets superstar Kyrie Irving.

According to a report from Wojnarowski, the Lakers are included in a "list of teams" Irving would consider the Nets to send the 30-year-old guard to via sign-and-trade. That list also included the Clippers, New York Knicks, Miami Heat, Dallas Mavericks and the Philadelphia 76ers, Wojnarowski reported.

The possible move, however, could be easier said than done as the Lakers enter the 2022-2023 NBA season with not enough salary cap space to accommodate Irving. As of Thursday afternoon, the Lakers will pay Russell Westbrook, who will make just over $47 million; LeBron James just over $44 million; Anthony Davis just under $38 million; Talen Horton-Tucker just over $10 million; and Kendrick Nunn about $5 million for the upcoming season. The Lakers will need to pull off some cap-space magic if the team wants any chance of a possible LeBron-Kyrie reunion.