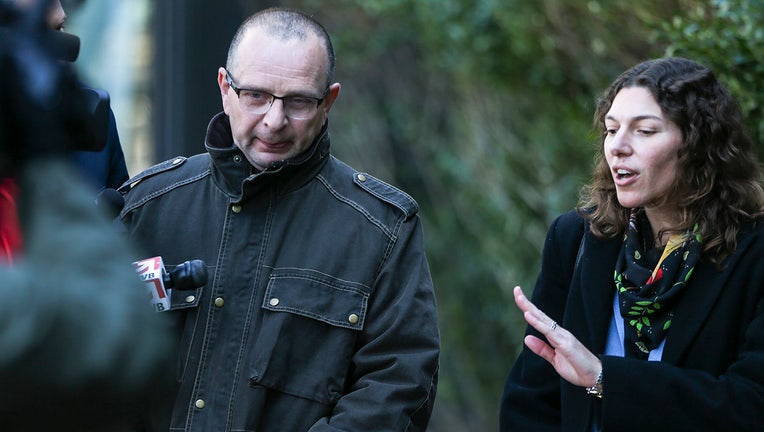 Igor Dvorskiy, left, director of a private elementary and high school in Los Angeles, and standardized test administrator for the College Board and ACT Inc., is pictured outside the John Joseph Moakley United State Courthouse in Boston on March 25, 2 (Nathan Klima for The Boston Globe via Getty Images)

LOS ANGELES (CNS) - The head of a West Hollywood private school where some parents allegedly had their children's college entrance-exam scores fixed filed court papers today in Boston indicating he will plead guilty and cooperate with investigators.

Igor Dvorskiy, director of the West Hollywood College Preparatory School, agreed to plead guilty to a single count of conspiracy to commit racketeering, and he is expected to enter the plea no later than Nov. 20, according to a plea agreement filed in federal court in Boston.

The Sherman Oaks man also agreed to cooperate with the government's investigation and to testify in court if called, according to a supplemental document. He also agreed to forfeit $150,000.

Dvorskiy is accused of accepting bribes to help parents rig their children's scores on SAT and ACT exams. Authorities say he received $10,000 per student while administering tests at his school.

If prosecutors determine Dvorskiy's cooperation has been useful, they will recommend a sentence below the guideline range of 24 to 30 months in prison, according to the U.S. Attorney's Office in Boston.

Dozens of parents and college athletic coaches were implicated in the nationwide bribery scandal, in which wealthy parents paid Newport Beach businessman William "Rick" Singer thousands of dollars to have their children's entrance-exam scores doctored. In other cases, students were falsely admitted to elite universities as athletic recruits, even though they never had any experience in the sports for which they were being recruited, prosecutors said.

Oscar-nominated actress Felicity Huffman was sentenced last month to 14 days behind bars for her role in the bribery scheme. The "Desperate Housewives" actress pleaded guilty to paying a $15,000 bribe to have a proctor correct her daughter's answers on a college-entrance exam.

"Full House" actress Lori Loughlin and her husband, fashion designer Mossimo Giannulli, have pleaded not guilty to federal conspiracy and money- laundering charges in the scandal.