HAWKINS COUNTY, Tenn. - Reports of an active shooter at a high school in Tennessee prompted brief lockdowns of multiple area schools and a heavy police presence, though no suspect was found and no injuries were reported.

Volunteer High School, located in Church Hill in northeastern Tennessee, was placed on lockdown around 8 a.m. local time after the Hawkins County Sheriff’s Office received a call stating that an active shooter was inside the school.

"Deputies responded and immediately began searching the school. At this time, a suspect has not been located and no injuries have been reported," the sheriff’s office said in a 10:45 a.m. statement.

Students were later evacuated to the Mount Carmel National Guard Armory to be reunited with their parents. 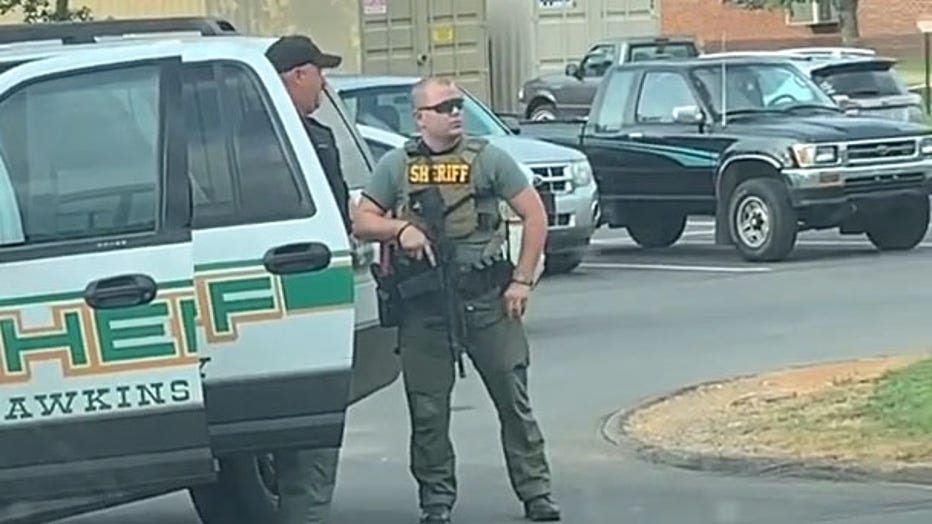 A screengrab from a video shows law enforcement on Aug. 10, 2021, at Volunteer High School in Church Hill, Tennessee. (Credit: Rhonda Lawson via Storyful)

Later on Tuesday, authorities said they believed the call was a "hoax."

"Right here, we’re telling you straight up, this was a hoax," Hawkins County Sheriff Ronnie Lawson said at a news conference, alongside the police chief. "There was no gunfire. Nobody injured. Thank god everybody is safe."

Lawson said the 911 caller claimed to be in a school bathroom with a handgun, saying he had been bullied by popular students and was going to the gym to shoot the weapon. Lawson said one police officer was in the high school while the person was still on the phone with the 911 dispatcher.

Tuesday was the district’s first full day of school, according to a calendar posted online. Students attended classes Monday but only for a half-day. Classes were expected to resume Wednesday.

Earlier in the day, footage posted on Facebook by Rhonda Lawson showed police vehicles outside the high school, which Lawson told Storyful that her son attends.

A post by the Hawkins County School District had asked residents to stay clear of the area to allow law enforcement and emergency personnel to access the area.

The district said several other schools were also briefly locked down "out of an abundance of caution," which has since been lifted.