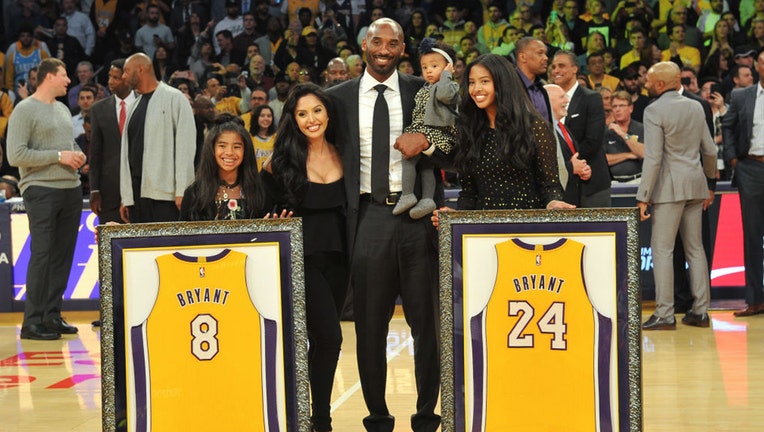 LOS ANGELES - Vanessa Bryant posted a tribute to her late daughter Gianna 'Gigi' and husband Kobe Bryant in a series of heartbreaking posts this week on Instagram.

Vanessa shared the heartfelt messages in a photo and a series of videos from a jersey retirement ceremony held at the 13-year-old's middle school in Newport Beach.

"My Gianna. God I miss you. I’ve been so lucky to have woken up to see your gorgeous face and amazing smile for 13 years. Wish it would’ve been until my last breath," Bryant posted.

"My Gigi. I love you! I miss you. You’ve taught us all that no act of kindness is ever too small. Mommy is still and will ALWAYS be so proud of you mamacita."

In the videos Vanessa shared showed some of Gianna’s classmates singing in memory of the teen. Teachers also spoke highly of her during the ceremony.

“In my 20 years of coaching basketball, Gigi was one of the fiercest competitors that I’ve ever seen,” her coach said.

Another post featured a painting of Gigi smiling bright in a Los Angeles Lakers jersey holding a basketball.

"Seeing my babygirl smile and happy again with a basketball under her arm, wrapped in love just warmed my heart. Thank you for this [Reina Koyano] thank you!! My Gigi," Bryant posted.

Bryant called Kobe "my best friend" and "the best daddy."

And in a video post, Vanessa shared a clip of Kobe being interviewed on "Extra."

When asked in the TV clip who his best friend is, he responds: "My wife."

NBA legend and longtime Laker Kobe Bryant, his daughter Gigi, and seven other victims were killed in a helicopter crash in Calabasas on the morning of January 26. The chopper was reportedly heading to the Mamba Sports Academy in Thousands Oaks for Gigi’s basketball game.

He is survived by his wife, Vanessa, and their three daughters, Natalia, 17, Bianka, 3, and Capri, 7 months.