The parents of a 14-year-old Valentina Orellana-Peralta who was fatally struck by a stray bullet fired by Los Angeles police at an assault suspect inside a North Hollywood clothing store publicly called for full transparency during the various investigations into the shooting.

NORTH HOLLYWOOD - The parents of a 14-year-old girl who was fatally struck by a stray bullet fired by Los Angeles police at an assault suspect inside a North Hollywood clothing store publicly called Tuesday for full transparency during the various investigations into the shooting.

In a tearful, emotional news conference outside LAPD headquarters, Valentina Orellana-Peralta's parents described the horror of losing their daughter two days before Christmas. The girl was with her mother in a dressing room, trying on Christmas dresses, when she was struck by a police bullet that passed through a wall on the second floor of the Burlington store at 12121 Victory Blvd.

The girl died in the arms of her mother, who said she and her daughter sat down and hugged when they heard the commotion in the store, and the force of the gunshot that struck Valentina threw them to the ground.

"As I lay screaming for help, the police did not come to help me or my daughter, but I kept screaming," Valentina's mother, Soledad Peralta, said. "When the police finally came, they took me out of the dressing room and left my daughter laying there. I wanted them to help her, but they just left her laying there alone." 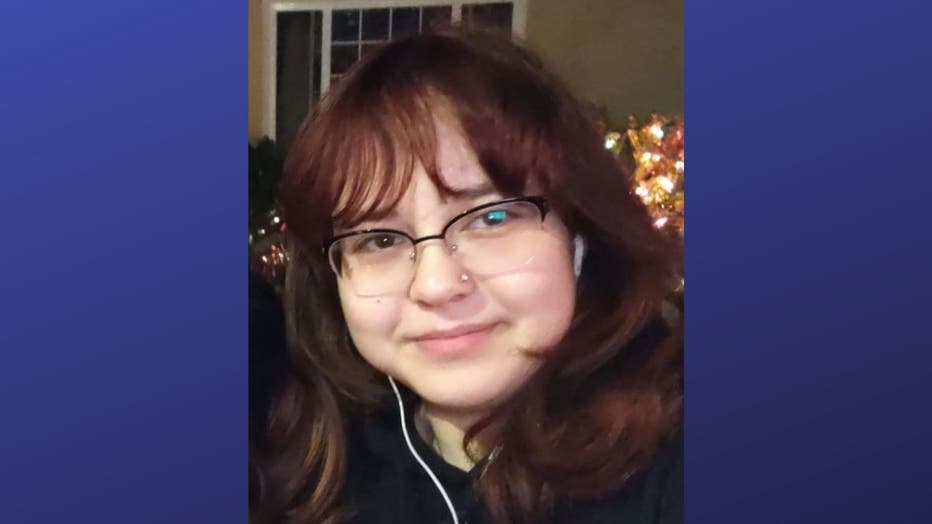 Valentina Orellana Peralta was shopping with her mom at the Burlington in North Hollywood Thursday afternoon when she was fatally struck by a stray bullet as police fired at an assault suspect.  (Orellana-Peralta Family)

Attorney Rahul Ravipudi said the family's lawyers sent a preservation of evidence letter to the LAPD "so that we actually can have transparency on all of the evidence and all of the information, so that the LAPD doesn't drive the narrative on what they did. We can expose that truth ourselves."

Ravipudi said the letter was sent immediately after the shooting "to make sure that all of that evidence is saved" and available to attorneys throughout the investigation.

While police released body-worn camera footage of the shooting on Monday, attorney Ben Crump said Tuesday that attorneys believe there is also surveillance video from the Burlington store itself, which they are trying to access. Some surveillance video clips were released by the LAPD Monday.

"We want all the documentation, complete transparency, not just a perspective that tries to justify things, we want everything released," said Crump, a high-profile civil-rights attorney who has represented clients including the family of George Floyd, who died while being arrested by Minneapolis police, setting off national protests.

Crump said attorneys are "going to address how things could have been done differently to prevent (Valentina) from being collateral damage."

"We should not have to sacrifice innocent life in the name of safety," Crump said.

Valentina's parents, speaking through translators, said their daughter came to Los Angeles from Chile about six months ago and had dreams of becoming an engineer, an American citizen and going to see a Los Angeles Lakers game with her father.

"She wanted to be here in the United States because this was the land of opportunity, and she was excited about that," attorney Erica Contreras said, translating for Valentina's father, Juan Pablo Orellana Larenas.

Crump read a letter sent to the family by the school's principal, Colleen Molina, saying Valentina "was an amazing young woman who was brave and showed so much growth in such a short time here at HTLA."

A GoFundMe page established to benefit the teen's family had raised nearly $30,000 by midday Tuesday.

Los Angeles police on Monday released body-camera footage and other details of the shooting, which occurred around 11:45 a.m. Thursday when officers responded to reports of a man assaulting people, and possibly firing shots, inside the Burlington store.

The narrated video released by the LAPD includes footage showing the assault suspect viciously attacking a woman on the second floor of the Burlington store, repeatedly beating her with a steel or metal cable bike lock, leaving her bloodied on the floor as officers arrived.

Body-camera video captures the sound of police gunfire quickly ringing out as officers spot the suspect -- with the cable lock in his hand. More than a half-dozen officers descend on the suspect after the shots are heard, and the injured suspect is taken into custody, and later pronounced dead on the scene.

While the video shows the suspect with the cable lock in his right hand, there is no indication he is armed with a gun, and it is unclear if he advanced on any officers before the shots rang out. Police have said no gun was found at the scene.

The video released by the LAPD Monday includes audio from a series of 911 calls. In one call, a store employee tells a dispatcher a suspect is in the store attacking people with a bike lock. In another, a woman reports the sound of shots being fired in the store, saying there's "a guy with a gun." Another caller reports that her mother was hiding inside the store because of a man making threats. She added, "I don't know if he has a gun, I don't know what he has, but they're hiding."

The video released by the LAPD shows the suspect, identified as 24- year-old Daniel Elena Lopez, entering the store with his bicycle around 11 a.m.

"(The suspect) took the escalator up to the second floor," LAPD Capt. Stacy Spell says on the video. "He laid his bike in an aisle and walked around the store putting on clothes."

Spell said a store employee approached Lopez about his bicycle and left the area. Lopez then allegedly smashed a computer monitor and a glass railing with a bike lock before going back down the escalator and encountering a woman, Spell said.

Lopez allegedly attempted to steal the woman's bag and hit her with the bike lock when she resisted. The woman fled the scene and has not been identified.

Lopez waited at the bottom of the escalator as another woman descended and allegedly attempted to grab her, but she was able to break free and fled the store as well, Spell said. He then went back up to the second floor and can be seen on surveillance video striking a third woman from behind with the lock.

The video shows the suspect attacking the woman from behind, striking her in the head with the cable lock. The woman struggles with the suspect, who at one point drags the woman along the floor. The suspect can then be seen repeatedly beating her with the lock as she lies on the floor.

Body-camera footage from arriving officers shows police as they spotted the woman on the floor, then the suspect a moment later at the end of a store aisle -- then the sound of police gunfire. 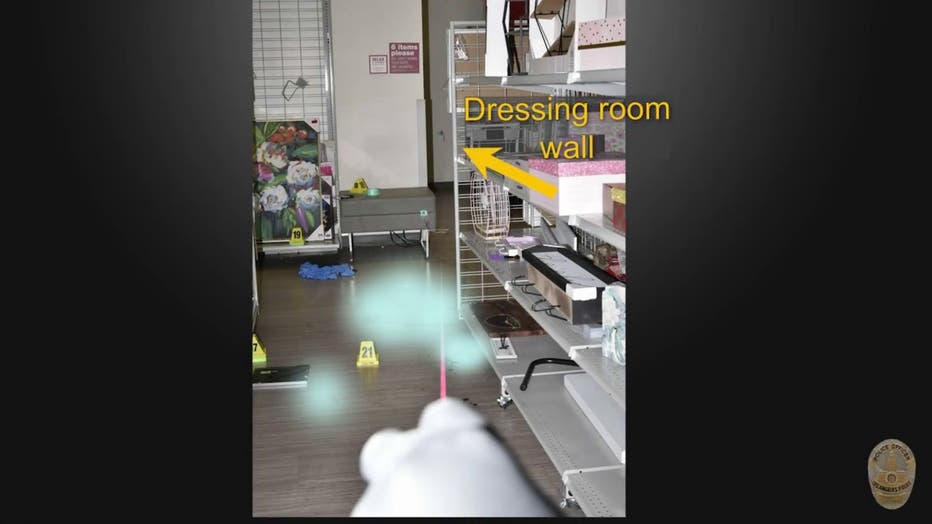 After the wounded suspect was detained, and eventually pronounced dead, officers found the 14-year-old girl dead in a dressing room that was behind the suspect when the shooting occurred. According to the video released Monday, police believe a bullet fired by police skipped off the floor of the store and passed through the dressing room wall, striking the teen on the other side.

LAPD Chief Michel Moore, who was out of town with family but briefed on the shooting, said in a statement over the holiday weekend: "This chaotic incident resulting in the death of an innocent child is tragic and devastating for everyone involved."

"I am profoundly sorry for the loss of this young girl's life and I know there are no words that can relieve the unimaginable pain for the family," Moore said. "My commitment is to conduct a thorough, complete and transparent investigation into the circumstances that led up to this tragedy and provide the family and public with as much information as possible," the chief added.

The LAPD Family Liaison is working closely with the Mayor's Crisis Response Team and Councilwoman Monica Rodriguez to provide assistance to the 14- year-old girl's family, a department official said.

The department's Force Investigation Division and Inspector General's Office were both investigating the shooting, along with the California Department of Justice's California Police Shooting Investigation Team for Southern California. The DOJ investigates officer shootings under provisions of a bill signed into law last year.

Once the investigation has been completed, the results will be turned over to the California Department of Justice's Special Prosecutions Section within the Criminal Law Division for independent review.

Local civil rights leaders on Monday called for the arrest and prosecution of the officer who fired the shot that killed the teen. On Tuesday, some called on Los Angeles District Attorney George Gascon to appoint a special investigator in the case. 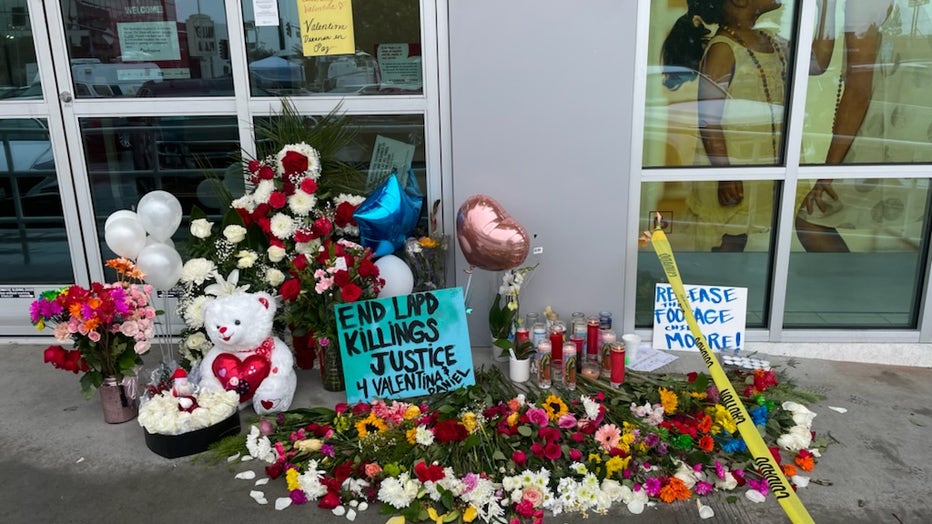 Photo courtesy of the Orellana-Peralta family

In a joint statement, Earl Ofari Hutchinson and Pedro Baez, the president and vice president, respectively, of the Los Angeles Urban Policy Roundtable, said, "The slaying was unprecedented in its scope and tragedy. This demands an intense, focused and urgency basis investigation of the slaying to determine possible prosecution of the officer involved for the illegal use of deadly force."

On Saturday, the League of United Latin American Citizens criticized the shooting, calling it "indefensible" for police to open fire in the middle of a store without knowing if the suspect was armed.

The officer who fired the shot that killed the teen was placed on administrative leave while the investigation is ongoing, police said Friday.  The officer is identified as Officer William Jones, who is assigned to the North Hollywood Division.

The Los Angeles Police Protective League, the union representing LAPD officers, issued a statement saying, "Words cannot convey our utter sorrow over the loss of Valentina Orellana-Peralta. We pray for Valentina's family as they cope with this unbearable tragedy and we also pray for the officer involved in this incident as he is devastated over what occurred."

The Los Angeles Times reported that Lopez had convictions for car theft, carrying a loaded gun in public and carrying a gun as a felon.

The newspaper also reported that he was arrested in the San Fernando Valley in August 2020 and charged with domestic battery, stealing a car and recklessly fleeing the police, later pleading guilty to domestic battery and fleeing police and sentenced to two years in state prison.

A spokeswoman for the state corrections department declined to release Elena Lopez's commitment history to The Times, citing the ongoing investigation into the North Hollywood shooting.

Moore told The Times it did not appear that the officer who fired "would have known that there was anyone behind there or that he was looking at anyone other than the suspect and a wall," but said every aspect of what occurred and why would be analyzed by LAPD investigators.