The teenagers, Avi Schiffmann and Marco Burstein, hope the website will 'really puts the power back in the hands of the refugee.' (Credit: Avi Schiffmann)

CAMBRIDGE, Mass. - Harvard student Avi Schiffmann was attending a pro-Ukraine demonstration while visiting San Diego last month when he came up with an idea to create a website connecting Ukrainian refugees to hosts around the world, so they could easily find housing.

"I felt like I had the skills to really make something here with technology to help the few hundred million people in Ukraine and all around Eastern Europe," Schiffmann told FOX Television Stations Group Wednesday. Through his research, he found websites currently offering to house refugees were cumbersome and "not up to par at all."

That’s when the 19-year-old reached out to fellow classmate Marco Burstein, 18, for help developing the idea.

Burstein, who is currently studying computer science at Harvard, agreed to help Schiffmann, and within just three days, the platform Ukraine Take Shelter was completed.

RELATED: US to accept up to 100,000 Ukrainian refugees, expand Russia sanctions

"I really felt like I just needed to get this out at soon as possible," Schiffman continued, noting his desire to create a site that "really puts the power back in the hands of the refugee", while also being user-friendly."

These people are running away from live gunfire, explosives, lost and confused or in a foreign country in a language they don’t speak," Schiffmann said, adding, "They just need to be able to use this website and get the information they need as fast as possible."

Since launching Ukraine Take Shelter on March 3, he said the response has been "incredible," citing one story that sticks out in his mind. 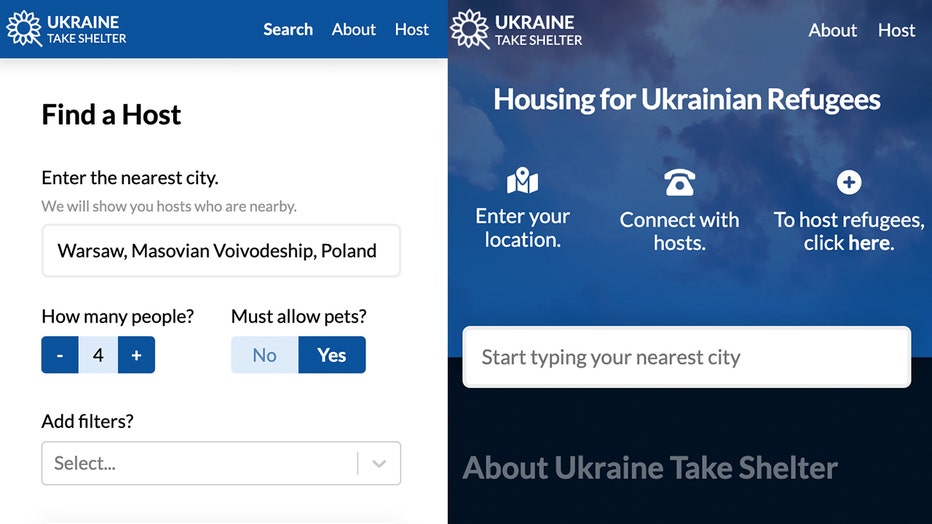 A family, who was hiding in a basement in Kharkiv, were looking to escape as their city was besieged by Russian troops.

They were able to use the website to find a host in France, so the family fled. Three days after arrival, the family discovered that their entire home in Ukraine was destroyed by bombs.

"So that story was really incredible to me, because this website is not only able to help people find housing but in a way, also saved their lives," Schiffmann added.

And, this isn’t the first time the teenager has used his experience in technology to help people.

During the COVID-19 pandemic, he developed a website to track the impacts of the coronavirus. He also created a website during the Black Lives Matter protests.

"I think it’s incredible what you can do with technology these days," he concluded. "The internet has not been fully explored for what you can do in the humanitarian sense."

What is Ukraine Take Shelter?

UkraineTakeShelter.com is an independent platform connecting Ukrainian refugees with potential hosts and housing.

The website design is simple to use. Refugees can go directly to the site, where they are met with a search bar and can enter the nearest city where they hope to flee. Each listing comes with a description of the accommodations.

The website has also been translated into dozens of native languages including Ukrainian, Polish and German.

The organization encourages everyone with spare space to post a listing and to mark their listing as filled once they have successfully taken in refugees.

This news comes as thousands of people continue to flee from Ukraine.

On Thursday, the White House accounted that the United States would expand its sanctions on Russia in response to the invasion of Ukraine, targeting members of the country’s parliament and the central bank’s gold reserves.

At the same time, Washington said it will increase its humanitarian assistance by welcoming 100,000 Ukrainian refugees and providing an additional $1 billion in food, medicine, water and other supplies.

The White House announced the initiatives as U.S. President Joe Biden and world leaders gathered in Brussels for a trio of summits in response to the Russian invasion, seeking new ways to limit the economic and security fallout from the conflict.