LOS ANGELES - A two-year investigation into narcotics dealing in the Skid Row area of Los Angeles has resulted in 50 arrests and the seizure of various quantities of drugs, including more than 46,000 fentanyl pills, authorities said Friday.

The multi-agency operation included personnel from the Los Angeles Police Department and the Drug Enforcement Administration, and targeted those responsible for "sales and distribution of narcotics in the Skid Row area, primarily to the homeless population," the LAPD reported.

"Many of the individuals living in the Skid Row area are also narcotics users," an LAPD statement said. "The street dealers prey on the homeless when they received their public assistance at the beginning of the month. It is well known that gang members and associates from areas throughout Los Angeles County have traditionally controlled narcotics sales in the Skid Row area." 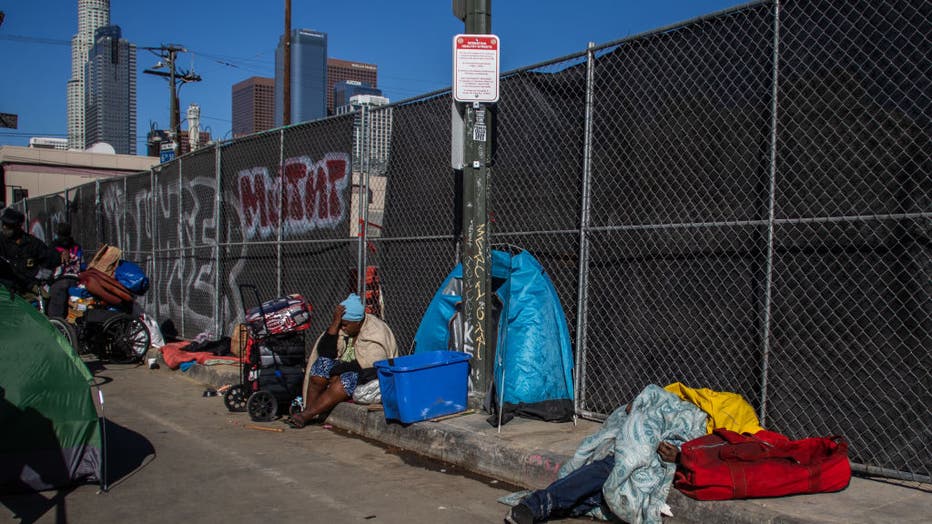 Homeless people sit and sleep on the sidewalk in front of the non-profit Midnight Mission's headquarters, while traditional Thanksgiving meals are served to nearly 2000 homeless people in the Skid Row neighborhood of downtown Los Angeles on November

To date, authorities have seized five kilograms of cocaine, 857 pounds of methamphetamine, five pounds of heroin, one kilogram of fentanyl, more than 46,000 fentanyl pills, six firearms and about $250,000 in cash from narcotics sales, police said.

Fifty arrests have been made, including four people taken into custody this week, and another 16 arrests are pending, police said.

"This operation should communicate a clear message to these individuals and other gangs operating in the Skid Row area that it is not business as usual, and law enforcement will use all available resources -- state, federal and local -- to bring them to justice if they chose to victimize our communities by engaging in the distribution and sales of dangerous narcotics," police said.

The charges faced by the suspects include possession for sales, and conspiracy to sell and/or distribute illegal narcotics. If convicted on the most serious charged offenses, the defendants could face up to 10 years in prison.

"This investigation showed us there are people living in the suburbs, some with violent criminal histories, who wake up every day and make the conscious decision to commute to the downtown area and sell dangerous and highly addictive drugs on the streets," said DEA Los Angeles Field Division Special Agent in Charge Bill Bodner.

"Their target customers in many cases are people experiencing homelessness." Bodner said. "With drug caused deaths up nationally over 30% from last year, and the signs of mental health struggles and substance use disorder becoming more and more evident in our city, we must continue to take steps like this investigation to stop this callous exploitation and victimization of our most vulnerable communities."