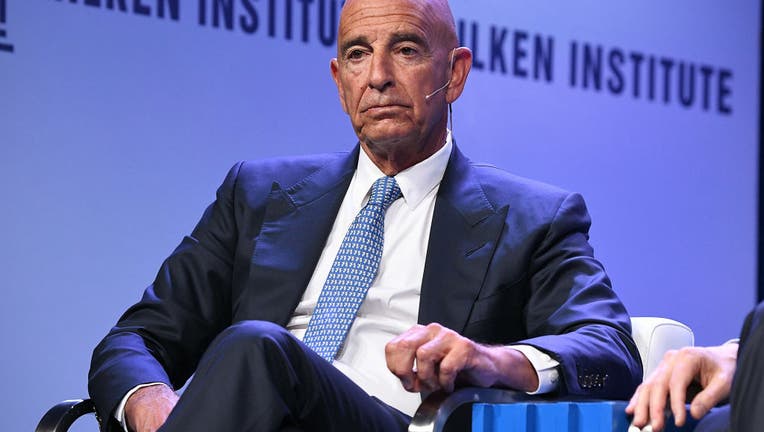 LOS ANGELES - Thomas Barrack, who chaired President Donald Trump's inaugural committee, has been granted a bail package in Los Angeles federal court that includes a $250 million bond secured by $5 million in cash following his arrest in connection with a federal indictment accusing him and two others of unlawfully lobbying on behalf of the United Arab Emirates during the 2016 presidential campaign and beyond.

U.S. Magistrate Judge Patricia Donahue also ordered Barrack to wear a GPS monitoring bracelet, barred him from transferring any funds overseas and restricted his travel to parts of Southern California and New York. He was also told to appear Monday in federal court in Brooklyn, New York, where he will be arraigned, according to the U.S. Department of Justice.

Federal prosecutors had asked in court papers that Barrack be denied bond and kept in custody while he is transferred to New York for arraignment, on the grounds of his wealth, foreign ties and access to private aircraft.

Barrack, 74, of Santa Monica, was arrested Tuesday and named in a seven-count indictment unsealed in New York, along with Matthew Grimes, 27, of Aspen, Colorado, and Rashid Sultan Rashid Al Malik Alshahhi, 43, a UAE national, according to the DOJ.

Barrack and Grimes were both initially ordered detained pending detention hearings in downtown Los Angeles. Alshahhi remains at large. According to federal authorities, the indictment alleges a conspiracy to advance the interests of the UAE in the United States "at the direction of senior UAE officials.'' The defendants are accused of working on behalf of UAE "by influencing the foreign policy positions of the campaign of a candidate in the 2016 U.S. presidential election and, subsequently, the foreign policy positions of the U.S. government in the incoming administration, as well as
seeking to influence public opinion in favor of UAE interests.''

Barrack -- who resigned from the USC Board of Trustees one day after his arrest -- is a close friend and ally of Trump, one of his top fundraisers and served as the chairman of Trump's inaugural committee.

"The defendant's repeatedly capitalized on Barrack's friendships and access to a candidate who was eventually elected president, high-ranking campaign and government officials and the American media to advance the policy goals of a foreign government without disclosing their true allegiances,''

Acting Assistant Attorney General Mark Lesko of the Justice Department's National Security Division said in a statement. "The conduct alleged in the indictment is nothing short of a betrayal of those officials in the United States, including the former president. Through this indictment, we are putting
everyone -- regardless of their wealth or perceived political power -- on notice that the Department of Justice will enforce the prohibition of this sort of undisclosed foreign influence.''

The three defendants are accused in the indictment of acting and conspiring to act as agents of the UAE between April 2016 and April 2018. Barrack is also charged with obstruction of justice and making multiple false statements during a June 20, 2019, interview with federal law enforcement.

According to federal prosecutors, the trio took a variety of steps to advance the interests of the UAE domestically. For instance, Barrack allegedly inserted language praising the UAE into a 2016 Trump campaign speech on U.S. energy policy, then emailed an advance draft of the speech to Alshahhi for
review by senior UAE officials, prosecutors contend.

The trio are also accused of working after Trump's election "to influence the foreign policy positions of the incoming administration to favor UAE interests.'' Barrack allegedly told a group of UAE government officials in December 2016 to create a "wish list'' of U.S. foreign policy items the UAE
wanted to accomplish over the course of Trump's administration.

Barrack also allegedly worked on behalf of the UAE in opposition to a proposed summit at Camp David to discuss an ongoing dispute among the UAE, Qatar and other Middle Eastern governments, even seeking a meeting with Trump to advise against the summit. The summit never occurred, according to the DOJ.

None of the defendants provided any required notification to the U.S. Attorney General that they were acting as agents of a foreign government.